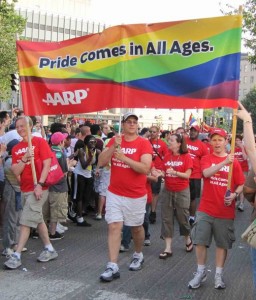 There apparently are few groups that the far right elements of the GOP will not attack, including AARP.  Of course, AARP opposes the GOP push to dismantle the social safety net and to restrict Medicare funding and to dismantle Social Security.  But AARP's real sin seems to be that it doesn't treat LGBT individuals as diseased vermin and supports policies that would make the senior years of LGBT Americans more secure.  That is simply heresy to the knuckle dragging, spittle flecked "godly Christian" crowd at American Family Association, a SPLC designated hate group.  An article in Think Progress looks at the far rights war against AARP.  Here are highlights:

AARP strives to serve the interests of all people over the age of 50, and that includes members of the LGBT community. The organization has a webpage dedicated to AARP Pride, with resources related to issues like marriage equality’s legal benefits, nondiscrimination protections in nursing homes, and unique health concerns like HIV. Because of AARP’s inclusiveness, the American Family Association is specifically targeting the retirement group for contributing money to the “homosexual agenda.” AFA Executive Vice President Buddy Smith offered this warning:


SMITH: When you reach the age of a person like myself and you begin to get information from the AARP saying that they will represent you and your values and standards, you’d better be careful. This group is a very, very powerful Washington lobby, and you just may be very surprised and disappointed to see those things that they are promoting and those things they are opposing.

Be very careful that you know what your fees are going for because the AARP is not on your side. If you are a Christian and believe in Biblical values, you can pretty much count on the fact that everything that you are in favor of, the AARP is opposing.

LGBT older adults face many unique challenges, especially in regards to their very economic well-being. Because of discrimination and alienation throughout their lifetime, as well as their inability to claim partner benefits like Social Security, LGBT older adults are much more likely to be living in isolation and poverty. It makes perfect sense that AARP would recognize that a segment of its constituency experiences particularly troubling circumstances and could use additional support. Conservatives, like AFA’s own Bryan Fischer, have long claimed that gay men die early because of HIV and other supposed consequences of “homosexual behavior,” so perhaps Smith thinks AARP should be a straights-only organization because he believes it already is.  If AARP is supporting the “homosexual agenda,” then that agenda is merely survival.