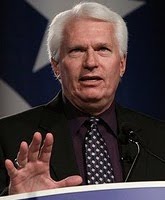 There are not too many anti-gay Christofascists for vile than American Family Association's Bryan Fischer who seemingly has worked over time to justify the organization's hate group designation by the Southern Poverty Law Center.  Of course, it's not just gays that Fischer seems to hate.  You can add blacks, Hispanics, American Indians, liberal women - the list is very lengthy.  Thus, it was delicious when Fischer found himself caught up in a bizarre interview with Alan Colmes where Fischer refused to say he's never had homosexual attractions.  A simple "No" response would have been so easy.  That Fischer refused to answer suggests that maybe he IS a closet case like so many other loud homophobes.  Right Wing Watch looks at the interview.  Here are highlights:

We seem to recall that after the last time Bryan Fischer appeared on Alan Colmes' radio program, he vowed never to appear on his show again.  But he must have changed his mind, because last night he returned to Colmes' program to discuss a variety of subjects, like his belief that President Obama will seek to forcibly disarm Christians and that homosexuality will be reponsible for the collapse of the western economy.

But things took a turn for the awkward near the end of the interview when Colmes asked Fischer about his theory that being selective in one's choice of sexual partners demonstrates that being gay is a choice.  When Colmes asked Fischer to explain this, Fischer said it simply proves that "people are not obligated to act on every sexual impulse that they experience," which prompted Colmes to ask Fischer if he had ever experienced any gay impulses ... but Fischer wasn't about to engage in that conversation:

Colmes: Have you ever had a gay impulse?

Fischer: (Laughing) Alan, I am not going to talk about that ...

Colmes: It's a simple yes or no question.

Fischer: We're not going to talk about that.

Colmes: Because maybe if you've been able to overcome your gay impulses and you've been successful in doing it, you could be a model for other people you'd like to see act the same way.
Fischer: The focus here, Alan, is that everybody experiences sexual impulses that if they acted on those impulses, it would destroy them.

Colmes: Well, can you give me an example from your own life? What would be some of yours?
Fischer: You've experienced them ...

Fischer: I've experienced them. Every man, every woman has experienced certain sexual impulses that, if they acted on them, if they conducted themselves by yielding to those impulses, it would destroy them. Ask Tiger Woods about that.

Colmes: I don't think I've ever had sexual impulses that would destroy the society or the culture or make me a deviant in some way. I honestly don't think that's ever happened, even in your eyes, so I'm surprised. I wonder what impulses you're talking about. If you've had them, I'd love to know what they are.

Fischer: Well the focus Alan is on sexual conduct, sexual behavior, not on sexual impulse ...

Colmes: So you won't tell me whether you yourself have been able to overcome a gay impulse?

Fischer: Alan, give it a rest.