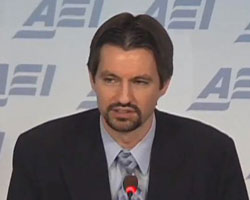 I catch a great deal of grief at times for maintaining that the GOP - a party for which I was once an activist and city committee member and precinct captain - now has racism as one of its twin pillars (the other pillar of the GOP is religious extremism).   But, from all I see and read, I believe I am on target.  This blog recently noted that the Heritage Foundation now headed by knuckle dragging Neanderthal, former GOP Senator Jim DeMint, had issued a position paper arguing against comprehensive immigration reform.  I should have known that the other shoe would soon drop, and sure enough, one of the authors of the Heritage paper (pictured at left) is on record as believing that "some races are more intelligent than others."  I think we all know which race he champions.  Media Matters looks at the mindset behind the Heritage Foundation report.  Yes, Hispanics - indeed all minorities - need to run screaming from the GOP.   Here are some article highlights:

A co-author of the Heritage Foundation's new immigration report, which right-wing media have hyped despite even conservative criticism about its methodology, has long promoted inflammatory theories about the relationship between race and IQ in Hispanic immigrants, an unsurprising fact given his ties to extremist anti-immigrant organizations.

Dylan Matthews of The Washington Post's Wonkblog reported that Jason Richwine, a co-author of the Heritage report, asserts in his 2009 doctoral dissertation titled "IQ and Immigration Policy" that "there are deep-set differentials in intelligence between races." Matthews wrote [emphasis added]:


While it's clear he thinks it is partly due to genetics -- "the totality of the evidence suggests a genetic component to group differences in IQ" -- he argues the most important thing is that the differences in group IQs are persistent, for whatever reason. He writes, "No one knows whether Hispanics will ever reach IQ parity with whites, but the prediction that new Hispanic immigrants will have low-IQ children and grandchildren is difficult to argue against."

Matthews also included Richwine's dissertation abstract, which forwards the idea that the U.S. should not only select its immigrant pool based on IQ, but that immigrants and their future generations are not apt to obtain his desired level of intelligence [emphasis added]:


The statistical construct known as IQ can reliably estimate general mental ability, or intelligence. The average IQ of immigrants in the United States is substantially lower than that of the white native population, and the difference is likely to persist over several generations. The consequences are a lack of socioeconomic assimilation among low-IQ immigrant groups, more underclass behavior, less social trust, and an increase in the proportion of unskilled workers in the American labor market. Selecting high-IQ immigrants would ameliorate these problems in the U.S., while at the same time benefiting smart potential immigrants who lack educational access in their home countries.

His dissertation, however, was not the first time Richwine promoted these offensive claims. In July 2008, while Richwine was a research fellow at the American Enterprise Institute, he said in a panel discussion of the book The New Case Against Immigration, broadcast on C-SPAN, that "races differ in all sorts of ways, and probably the most important way is in IQ."

Richwine's anti-immigrant language is reminiscent of that used by the Pioneer Fund, which the Southern Poverty Law Center designates as a hate group that "funds studies of race and intelligence, as well as eugenics, the 'science' of breeding superior human beings that was discredited by various Nazi atrocities."

There is more, but I will let readers check out the rest of the articles for themselves.  The bottom line is that this prevalent mindset in the GOP and far right elements.  And it's ugly, it's racist and it is contrary to everything that supposed Christians ought to be supporting.