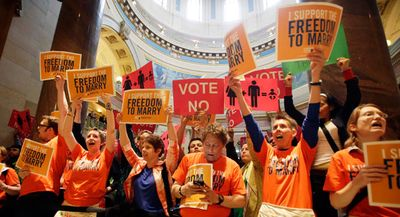 At the National Association for Marriage - a likely Catholic Church front group - folks must be shrieking and unleashing gallons of spittle.  After losing their effort to stop gay marriage and maintain religious based bigotry in the civil laws in Rhode Island and Delaware, the hate merchants appear headed to another defeat in Minnesota where they failed to bar gay marriage last November.   Today the Minnesota House passed a gay marriage bill today by a 75 to 59 vote and the bill will move to the Minnesota Senate on Monday where it is expected to pass.   The Governor Mark Dayton  has said that he will sign the bill once passed into law.   Not surprisingly, the political whores in the Minnesota GOP are whining and crying as if the world is ending.  And perhaps it is in terms of their ability to impose hate and fear based Christofascist religious beliefs on all of society.  Here are highlights from the Star Tribune on today's vote (NOTE: Republican by their very statements demonstrate that they ought to resign their offices since they are placing religious belief ahead of the state and federal Constitutions' guaranty of freedom of religion):

A bipartisan coalition in the Minnesota House passed a measure Thursday to legalize same sex-marriage, setting in motion what could be a historic turning point for gay and lesbian rights in Minnesota.

“All Minnesotans deserve the freedom to marry the person they love and we are proud to take this historic vote to ensure same-sex couples have that right,” said House Speaker Paul Thissen, DFL-Minneapolis.

The dramatic vote came after a sometimes passionate, three-hour debate that culminated when four Republican members privately wrestling with the issue joined a majority of Democrats to pass the measure 75-59. The debate raged as hundreds of advocates from both sides gathered outside the House gallery chanting, waving signs and praying.

Opponents failed in their last-minute push to persuade a crucial few legislators that the DFL-controlled Legislature is going against the wishes of a majority of Minnesotans. They are now regrouping to convince Senators that marriage is a union between one man and one woman ordained by God, not any state or federal law. A final Senate vote comes Monday.

“My heart breaks for Minnesota,” said a Rep. Peggy Scott, R-Andover.  “It’s a divisive issue that divides our state,” she said, wiping tears from her eyes as she stood on the House floor after the vote. “It’s not what we needed to be doing at this time. We want to come together for the state of Minnesota, we don’t want to divide it.”

Rep. Glenn Gruenhagen, R-Glencoe, said he fears that schools will eventually be forced to teach students about homosexuality in sex education classes, normalizing what he considers deviant behavior.   “Thinks about what’s best for the children,” Gruenhagen said. “Please vote for the children.”

Rep. Kelby Woodard, R-Belle Plaine, said the measure sends a terrible message to Minnesotans who oppose same-sex marriage.  “We are classifying half of Minnesotans as bigots in this bill — and they are not,” Woodard said.

Message to Reps. Gruenhagen and Woodard:  homosexuality IS NORMAL in nature and those who oppose it ARE bigots.  Who are the Republicans who voted "yes" for equality and placed themselves on the right side of history?  These: