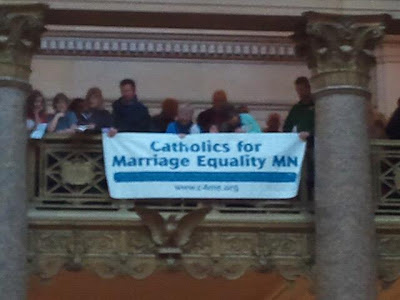 While it is not yet a done deal, as noted in a post yesterday it appears that gay marriage may be enacted into law sometime net week - perhaps as early as Monday.  One of the interesting phenomenon in the movement towards full marriage equality is that increasingly some faith groups - the good Christians, if you will - are joining the movement for equality.  Particularity sweet from my perspective is that a growing majority of the Catholic laity is supporting gay marriage in defiance of the the edicts of the child rapist enablers in the Church hierarchy.  Nowadays, if one wants to see genuine morality, the last place to look for it is among the "princes of the Church" who bring a new meaning to the term "moral cesspool."  A piece in Queering of the Church looks at those who have rejected the ignorance and bigotry that so long defined too many Christians - and which still defines the Christofascists.  Note too the role the ELCA has been  playing.  Here are some excerpts:

It’s not a done deal yet, but with comfortable passage through the Minnesota House tonight, approval by the Senate seems assured, and Governor Dayton has already promised to sign. It’s only a matter of time – and Catholics, once again, have been prominent in the campaign for equality.

This is not new: Catholics have been prominent in marriage victories elsewhere, as have other faith groups. (Mark D Jordan reminds us in “Blessing Same – Sex Unions” of something most of us have forgotten – that some same – sex couples were marrying or having their unions blessed in churches and temples for years, before legal recognition was even thought possible). But it is true that for a long time, it appeared that church groups were overwhelmingly opposed, and only fairly recently has faith – based support become reasonably widespread. Minnesota, I suspect, is one example where the religious support has been particularly telling.

Of the many Catholic activists and politicians who have contributed to this big win for authentic Catholic family values, is fellow blogger Michael Bayly, whose The Wild Reed was the inspiration and example that got me started myself. As I’ve followed his work over the past five years or so, I’ve noted how the case for marriage has increased steadily in prominence at The Wild Reed – and later at the dedicated site “Sensus Fidelium” (presenting news from Catholics for Marriage Equality MN).
I’m not going to even attempt to offer a run-down of all the people and groups who have contributed, or how. But for some indication of just how much there has been, cross to yesterday’s post at The Wild Reed, “Drawing the Circle Wide”, written in anticipation of today’s success and giving an extensive list of some of those people, with pictures, whose hard work has now paid off. Then cross to today’s post at Sensus Fidelium, “It’ll be legal by August 1st”, where you can read more about the legwork done by Catholics for Marriage Equality MN,  . . . .

From The Wild Reed, an extract:

On the eve of tomorrow’s historic Minnesota House vote to grant the rights and responsibilities of civil marriage to same-sex couples, hundreds of people of faith gathered earlier this evening at Christ on Capitol Hill Lutheran Church to “pray a new reality into being” – the reality of marriage equality for all, regardless of sexual orientation. The gathering was organized by the Faith Organizing Roundtable.

Four years ago MN State Sen. John Marty addressed the 2009 annual community meeting of theCatholic Pastoral Committee on Sexual Minorities and told those in attendance that “we can make it happen.” He was referring to marriage equality for all Minnesotan citizens, regardless of sexual orientation.

One of the definite highlights of the rally for me was when we unfurled the Catholics for Marriage Equality MN banner from one of the top balconies of the rotunda. I heard a thunderous wave of applause rise up from below, and thought to myself that the first of the rally’s speakers must have stepped up to the podium. Looking down I made the wonderful discovery that it wasn’t the appearance of a speaker that the crowd was so enthusiastically responding to, but rather the appearance of our banner!

The Church hierarchy is losing the war and by its continued anti-gay jihad it is accelerating its own irrelevance and  driving more and more younger voters who were raised Catholic - my own three children - away from the Church, probably forever.  I find it ironic and most sweet that the bitter old men in dresses in Rome can't see that it is they and their Christofascist allies, not modernity, who are killing the Christian brand.