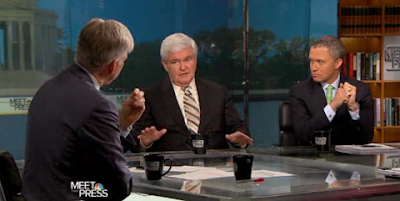 Newt Gingrich- perhaps to keep himself in the news and to hear himself speak - was on Meet the Press today promoting the Catholic Church hierarchy's lie that the Church is being persecuted and its rights being trampled upon by the recognition of gay rights and gay equality.  As is typical for both Gingrich and the Church hierarchy, the claims do not match objective reality because no one is preventing the Catholic Church from being involved in adoption/foster care services.  Rather, it is the Church which is trampling on the rights of other citizens and pushing to impose its beliefs on all.  And, like a school yard bully, once the Church can't have its own way, it grabs up its toys and stalks off feigning that it, rather than those it has persecuted for centuries, is the victim of persecution and/or censoring.  Towleroad looks at Gingrich's diarrhea of the mouth.  Here is the money quote:


On a segment on gay rights on Meet the Press today, Newt Gingrich complained about Catholic adoption agencies being "outlawed" in some states where marriage equality laws take effect. MSNBC contributor Joy-Ann Reid pointed out that it was the Church's decision to withdraw its services.


GINGRICH: "What I'm struck with is the one-sidedness of the desire for rights. There are no rights for Catholics to have adoption services in Massachusetts. They're outlawed. There are no rights in DC for Catholics to have adoption service. They're outlawed. This passing reference to religion, we sort of respect religion, sure, as long as you don't practice it. I mean I think it would be good to have a debate over, you know, beyond this question of, 'Are you able to be gay in America?' what does it mean? Does it mean that you have to actually affirmatively eliminate any institution which does not automatically accept that, and therefore, you're now going to have a secular state say to a wide range of religious groups, Catholics, Protestants, orthodox Jews, Mormons, frankly, Muslims, 'You cannot practice your religion the way you believe it, and we will outlaw your institutions.' ... Let's just start with adoption services. It's impossible for the Catholic Church to have an adoption service in Massachusetts that follows Catholic doctrine.

GINGRICH: No, they withdrew them because they were told, "You could not follow Catholic doctrine," which is for marriage between a man and a woman.

REID: I think the point is, is that you don't have the state attempting to tell religions what to believe. People, if they oppose the idea of gay marriage within their religion, have the absolute right to do so. The question is whether or not religious institutions can make public policy, whether they can enter the public policy--

That's right, NO ONE OUTLAWED Catholic adoption services.  The Church shut the programs down.  The other fact that Gingrich conveniently ignores is the fact that in many states - Virginia is certainly one such state - foster care agencies such as Catholic Charities function as an arm of the state and receive significant amounts of state funding.  As a result, these agencies are standing in the position of the state first and for the Church secondarily.  Therefore, it is only appropriate that as recipients of state funds the agencies not be given a free hand to discriminate against taxpayers.
Posted by Michael-in-Norfolk at Sunday, May 05, 2013