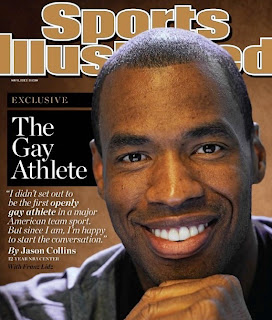 While right wing news outlets and the usual suspects among the professional Christian crowd have been hyperventilating and spewing venom over NBA star Jason Collins' decision to come out of the closet, a new poll shows that there is large public support for Collins.  Which shows that the Christofascists are ranting within a shrinking bubble.  And, as the aging homophobes and bigots who make up the GOP base and listener base for toxic individuals like Rush Limbaugh literally die off, I suspect the shrillness of the merchants of hate will only increase - and hopefully drive even more people away.   The Washington Post reports on the poll findings which cannot be good news from Tony Perkins, Brian Brown and others who enrich themselves by peddling hatred.  Here are highlights:


When Washington Wizards center Jason Collins made history last month as the first active male athlete in a major U.S. sport to come out of the closet as gay, it was met by an overwhelmingly positive response from prominent athletes, politicians and celebrities. It turns out that stance is shared by a vast majority of the country at large, according to results of a new Washington Post-ABC News poll.

According to the poll, 68 percent of Americans support Collins’ decision to come out, while only 23 percent are opposed, and the percentage of positive responses is higher among younger and better-educated respondents.

The results of the Post-ABC poll suggest Collins has widespread support for his decision from a cross-section of Americans. In addition to the overall numbers, Collins’ decision finds support among majorities of women (69 percent), men (67 percent), seniors (58 percent), non-college graduates (63 percent) and those who identified themselves politically as independents (73 percent) and Republicans (52 percent).

But the biggest support was among those who identified themselves as Democrats or college graduates, and those aged 30 or younger, with 81 percent of respondents in each group saying they support Collins’ decision. Gay marriage supporters are also overwhelmingly in support of Collins – 90 percent, versus 7 percent opposed.

[I]n the new poll, 66 percent of African Americans and 70 percent of whites support Collins’ decision, with nearly half of each group supporting him “strongly.”


Note the correlation between ignorance and bigotry - something that this blog has looked at before in terms of fundamentalist Christians having the lowest levels of education and IQ's.  The poll results are also bad news for the GOP's continued anti-gay platform.   The nation is changing and the GOP is on the wrong side of history. Here are other poll findings: 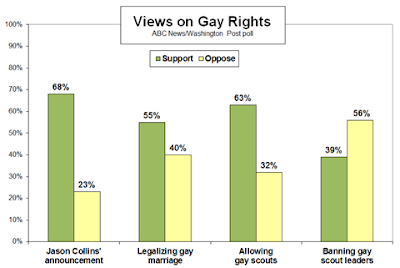