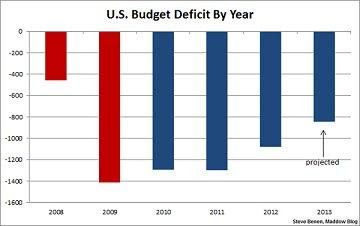 If one listens to the endless verbal diarrhea emanating from far right talk radio and many within the GOP - including some of my former proteges who seem to be imbibing Kool-Aid by the gallon -  you'd believe that the nation's budget is increasing.  Indeed, everything coming from the right describes President Obama as a big spender when not accusing him of being a socialist.  The truth, of course is quite different from the alternate universe inhabited by the Christofascists, Tea Party crowd and Fox News viewers.  Maddow Blog has some information that can't be popular with the far right.   Especially, because it shows the budget deficit exploding in 2009 after the U.S. economy tanked thanks to failed GOP policies and the unfunded wars in Iraq and Afghanistan launched by the cretin and sociopath known as George W. Bush and Dick Cheney, respectively.  Here's the money quote:

For deficit hawks, all of the news is good news.


The Congressional Budget Office reported Tuesday that the federal budget deficit is declining this year compared to fiscal 2012.


For the first seven months of 2013, the deficit was $489 billion. That is $231 billion less than the budget shortfall for the comparable period last year.
The decrease is almost entirely due to revenue increases.


Not only is this year's deficit on track to be significantly smaller than last year's, to the tune of about $200 billion, it's also on pace to be even better than optimistic projections from February. Hell, we even ran a surplus in April.

All told, the U.S. federal deficit will be about $600 billion smaller than it was in President Obama's first year in office, making this the fastest deficit reduction Americans have seen since World War II.


And with that, let's pause to note what a terrible mistake it is for Republicans to continue to prioritize a perceived problem that's quickly improving.

But let's also note another tidbit of information: one of the main reasons the deficit is shrinking so quickly is the increased revenue from the tax hikes that began in January.