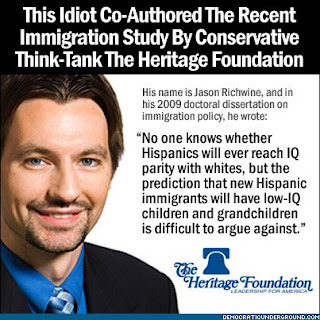 As noted in a recent post, the Heritage Foundation - which seems to be dumbing itself down in parallel with the GOP base - released an anti-immigration reform report that was supposed to win high praise among the right.  Instead, it has blown up in Heritage's face - especially now that the racist, anti-Hispanic views of one of its authors have been widely publicized.  Indeed, the organization may be on the verge of hiring an outside PR firm to try to minimize the longer term damage.  Candidly, the type of batshitery that was contained in the report should come as no surprise seeing that the Heritage Foundation hired extremist, racist, homophobe Jim DeMint as its new leader. As with Mitt Romney's "the 47%" statement, when people truly discover what the right really believes, the blow back can be powerful.   Politico looks at the efforts to manage the shit storm the report has triggered.  Here are highlights:


The Heritage Foundation has gone into damage-control mode in the last few days, after coming under fire from Republicans and conservative outside groups over a report it published that puts the price tag of immigration reform at $6.3 trillion.

The conservative think tank is considering hiring a high-profile public relations firm to help deal with the fallout of the report that was supposed to be their big play in the immigration debate, according to two sources familiar with Heritage.

The group has also come under scrutiny after it was reported that one of the authors of the report asserted previously that white Americans have higher IQs than immigrants.

The rollout was supposed to be a coming out party of sorts for Jim DeMint, who took the helm of the organization last month, after giving up his Senate seat to take the job. While DeMint was expected to give the group a higher profile, the backlash and controversy are not the kind of attention the group was hoping to garner.

One Republican operative who works on immigration reform said that hiring a crisis communications firm could help stop the bleeding with donors or other supporters. Heritage’s efforts to get traction for its immigration report could be hampered, the operative said, if it gets lumped in with groups like FAIR, NumbersUSA or CIS, which are considered pure opposition to the immigration reform effort.


Heritage has stood by its findings that an immigration overhaul would cost $6.3 trillion despite many conservative groups and lawmakers, including Sen. Marco Rubio (R-Fla.), calling the findings inaccurate.

The group has also been fending off attacks over one of the report’s coauthors, Jason Richwine. As part of his Harvard dissertation, Richwine, who is now a senior policy analyst at the think tank, argued that there was a long-standing difference between the IQ of white Americans and immigrants.  .   .   .

Heritage’s Gonzalez wrote in a blog post that the Harvard paper does not represent Heritage’s position.    “It’s findings do not reflect the positions of The Heritage Foundation or the conclusions of our study on the cost of amnesty to U.S. taxpayers, as race and ethnicity are not part of Heritage immigration policy recommendations,” Gonzalez wrote, adding that Richwine provided quantitative support to the lead author Robert Rector.


All in all, it is fun to watch the far right self destruct when it slips up and lets the world see its real racism and bigotry.   So much for wooing the Hispanic vote.