The "Choice Myth" - Denial and Life in the Closet 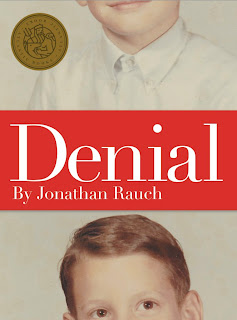 As this blog notes frequently, one of the linchpins to the Christofascists' anti-gay agenda is promoting the lies that homosexuality is a "choice," that gays can "change," and that "ex-gays" number in the hundreds of thousands (even though they never seem to be able to produce anyone except the same old "ex-gays for pay").  Their motivations are both political - if homosexuality is a choice, then no legal protections are needed for gays - and religious.  I continue to believe that on the religious front, gays are viewed as a lethal threat to those who, out of fear, fully embraced ignorance and perhaps psychological issues, need the Bible to be inerrant.   They simply cannot handle uncertainty or anything that requires thoughtful consideration and that one make their own judgment.  Thus, if the Bible is wrong about homosexuality, then they are forced to ask what else is it wrong about.  In short, their entire simple minded world view begins to collapse and their sense of superiority and self-satisfaction is threatened.


Meanwhile, of course, the "choice myth" and claims that gays can "change" inflicts untold misery on those like myself who as a teen realized that I did not fit the pattern of what was "normal" and struggled for decades to deny reality and be something that I could never be.  Jonathan Rauch has a new ebook, Denial: My 25 Years Without a Soul, that recounts his experiences that resemble many of my own.  Huffington Post has a three part series that looks at excerpts from Rauch's book.  Here are some excerpts from the third installment:

My thinking for a long time, as I struggled with my baffling fixation on muscles, was as follows. I was just a little boy: a child. I had a kind of kink in me which made no sense whatever, but this was all right. The reason it was all right was that it would go away.

I could only imagine, as a prepubescent boy, the relief I would feel when nature finally flipped that hormone switch, when at last I would begin to slaver and tremble over pictures of boobs in dog- eared copies of Playboy, stashed lovingly under my bed. I looked forward to it.

Reader, I do not doubt that you will be as surprised and dismayed today as I was then when I tell you that this is not what happened. Or, as I saw things then, it was not yet what happened.

What in the world was I? I pushed the question away. It pushed back. I pushed it away harder. It came back with redoubled force. I could only conclude, if I concluded anything, that I was a freak of nature. I had no sexual feelings, but instead was madly obsessive. I could not be a homosexual: I was not effeminate, I had no desire to be touched sexually by a man, indeed the concept mildly revolted me. But I was not behaving the way heterosexuals behaved. If I thought about it, I saw that there was no place on earth for me. I was otherworldly.

So, understandably, I tried not to think about it. Instead I did what has since become known as compartmentalizing. In one compartment was my rock solid belief that I had no sexual feelings at all. In the other compartment was: Paul. Day in, day out, Paul. Paul was a standing reminder that I was nothing like normal  .  .  .  .

I am always bitterly amused when I hear people say that homosexuality is a choice. Even many otherwise thoughtful people maintain that the homosexual is a heterosexual who perversely ignores, or at least somehow represses, his natural cravings. I say "otherwise thoughtful" because I know of no position which collapses more quickly, under even a moment's examination, than this one. Never mind the obvious question of why anyone would choose homosexuality, with all the inconveniences and confusions and difficulties it poses. Let us suppose, for argument's sake, that there are people who declare: "Actually, I would prefer to be (probably) childless, to face a hundred kinds of social difficulties, to disappoint and maybe horrify my parents, to risk alienating myself from some of my friends and many of my peers, to be an object of disgust and scorn to many millions of people. Sure. Sounds fun."

Let us also overlook, again for argument's sake, that many homosexuals, far from embracing their condition, struggle desperately to change or suppress it, even to the point of suicide. No: imagine that homosexuality is something many people contemplate and choose. Now arises the question: suppose (I want to ask heterosexuals) you decided, at age 14, to fall desperately in love with a classmate of your own sex. How would you go about doing it? How would you talk your temples into throbbing and your throat into constricting? How might you arrange to get a stone hard erection, all out of nowhere, whenever you touch the image of a certain young man's strong hand?

What hormonal levers would you pull? "Choose" to spend days in school and nights in bed thinking about, dreaming about, gazing upon Paul? Just so does the dragonfly choose the winds that whip it in a hurricane. Amid the storm, the only thing I knew, my only certainty, was that whatever was happening to me was driving me relentlessly, mercilessly, away from any hope of love.

What distresses me the most about the Christofascists is that in their selfish, psychologically disturbed need for "moral certainty" or "superiority," they don't give a damn about the harm they do to others.   It is ALWAYS just about them and their needs.  And sadly, this same pattern carries over to minorities, those of other faiths, and the ever derided "liberals."   Despite their protestations to the contrary, no one is more selfish than the Christofascists.