Former University of Richmond Football Star Comes Out as Gay 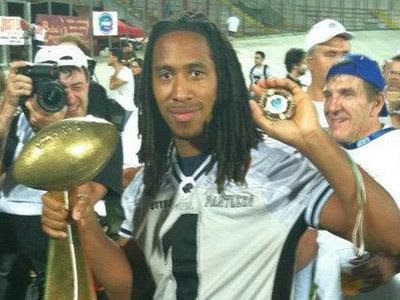 In the hierarchy of colleges and universities in Virginia, the University of Richmond does not rank among the more liberal institutions, although it is light years ahead in logic, reason and the embrace of modernity than the spittle flecked Bible beating institutions such as Pat Robertson's Regent University and the late Jerry Falwell's Liberty University.  Thus, it is interesting that Kevin Grayson (pictured above) one of the University of Richmond's former football stars who helped the school win a national title has come out as gay.  I suspect some heads in the alumni ranks must be exploding.  The Virginian Pilot and WTVR-TV have coverage on this  story.  First these highlights from the Pilot article:

Kevin Grayson, a former University of Richmond football standout, has announced he is gay.


Grayson, a wide receiver, played for the Spiders from 2007-2010, helping them win the Football Championship Subdivision national title in 2008. He was not drafted by an NFL team but played last year for a professional team in Italy.

“Why can’t I be the guy making plays that help my team win and still on the flip side be a gay male?” Grayson said in an interview that aired Tuesday night on WTVR-TV in Richmond.


WTVR reported Grayson is considering a return to Italy or trying to play in the Canadian Football League this year.

CHARLOTTESVILLE, Va. (WTVR) – Kevin Grayson has won championships at every level of competition–high school, college and professionally–and he has carried a secret each step of the way.  He is one of the most decorated football players Central Virginia has ever seen, and he happens to be gay.

“People didn’t believe it because I was an athlete,” Grayson said in an exclusive interview with CBS 6.

“They’re like ‘Kevin plays football, he plays basketball  he runs track–no way you know?’”
“Those are the types of things where if I could go back and say; ‘Why can’t I be an athlete? Why can’t I be a star player? Why can’t I be the guy making plays that helps my team win, and still on the flip side, be a gay male?’”

Grayson has “no doubt” there are gay players in the NFL currently, and admits to knowing some active players himself. But, he explained that “it’s one of those things where you meet someone and you find out about something it’s a ‘you take it to the grave’ type thing.”

Dr. Leticia Flores is a clinical psychologist at VCU specializing in issues of sexual and gender identity. She explained that some gays and lesbians spend much of their day trying to remember who might know about their sexuality, trying to guess how their friends..family and co-workers might react.

For athletes, and male athletes particularly, she said the stress can be compounded by societies’ perception of how they are supposed to behave.

“Male athletes are seen to be very masculine, very macho, a guy’s guy,” Dr. Flores said.  “And people’s stereotypes and biases against gay men is that they are the opposite of a guy’s guy.”  “It’s that extra pressure that you can’t even remotely show something that would lead someone to suspect you,” Grayson said.  “So it makes it ten times harder.”

Some of that pressure was relieved when Grayson chose to confide in a few trusted teammates, some of whom he found out were also gay and none of which shunned or turned their back on him. Now he is sharing his story with everyone, not only for the release for himself, but to hopefully inspire others hiding behind one too many masks.


“There’s clearly a relief and that relief comes from finally being themselves,” Dr. Flores said.  “We call it being, in the psych jargon, being authentic. But you’re who you are and you don’t have to wear the mask anymore”

Kudos to Kevin.  I hope his coming out will help young gays to come to terms with their sexual orientation and act in positive ways and not allow the hate merchants of the GOP and professional Christian crowd to diminish their pride in themselves.