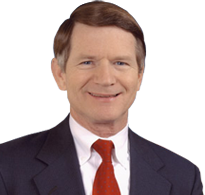 Nothing threatens the house of cards world view of the Christofascist - and by extension, the policy positions of the Republican Party - than modern scientific knowledge which shows that much of the Bible's supposed inerrant historical and doctrinal positions are untrue.  The human genome project that has confirmed that Adam and Eve were not historical figures is perhaps but one of the many scientific break through that have sent the fundamentalist crowd into conniptions and spells of the vapors.  So what does one do if one is a fundamentalist Christian or one of their political whores in the GOP?   You try to block new scientific research which may further discredit the veracity of supposedly Christian sacred texts.  Rushing in to do just that is GOP Congressman Lamar Smith of Texas (pictured at right) who has introduced a bill that would require that any research done using federal funds (which constitutes the majority of research done in the United States) must have its results and finding approved by the Committee on Commerce, Science, and Transportation of the Senate and the Committee on Science, Space, and Technology of the House of Representatives.  Given the far right GOP's stranglehold on the House of Representatives, this means that scientific research would come to a halt.  Thus we see the GOP's further embrace of ignorance in the quest to pander to the sensibilities of the most lunatic elements of the GOP base.  Here are some highlights on this idiocy:

Congressman Lamar Smith of Texas really does not understand science. Not scientific method, not scientific theories or laws, none of it. Which is why he submitted a bill draft titled the “High Quality Research Act” which would in effect add a politician into scientific studies.

The bill says that any research done using federal funds (which is the majority of research done in the United States) must have its results and finding approved by the Committee on Commerce, Science, and Transportation of the Senate and the Committee on Science, Space, and Technology of the House of Representatives. If the findings are not agreed to, the research is taken from the researchers and disposed of by Congress as it sees fit.


Congressman Smith has already landed himself in scientific hot water over his April 25th Letter to the National Science Foundation where he demanded that the NSF conduct an investigation into five research programs which contradict policies his donors want passed. This is what was expected when the noted anti-science Texan was appointed to the Congressional Committee on Science, Space and Technology.

Congressman Lamar Smith is a leading example as to the disconnect within the Republican Party and reality. His “improvement” would compromise scientific research, and dismantle what little America has left for integrity. Despite how many other industries have fallen apart across the United States, we as a nation remain the gold standard of scientific research. It appears Lamar Smith will not rest until that too joins our other areas of once excellence, and we surrender to our national collapse.

To be a Republican nowadays, one must be either (i) a far right religious nutcase, (ii) clinically insane, (iii) motivated first and foremost by greed, or (iv) have had a lobotomy.   My many Republican ancestors must be spinning in their graves if they can see what the once respectable and rational GOP has become.
Posted by Michael-in-Norfolk at Sunday, May 05, 2013

Here's one for you:
http://thenewcivilrightsmovement.com/cardinal-dolan-uses-nypd-to-bar-gay-catholics-from-sunday-worship-in-st-patricks-cathedral/discrimination/2013/05/05/66442