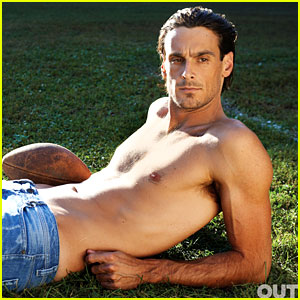 I will admit that I did not get the sports gene - at least not in terms of liking football, basket ball and base ball.  And, I do not follow pro sports, especially football, which I see as a bunch of grossly over paid gladiators that provides no real positive contribution to society.  However, Chris Kluwe and his gay rights advocacy showed that some NFL players have a brain (OK, he's an exception, I know) and are willing to stand up for equality.  Now, however, some are speculating that Kluwe's advocacy may be part of what lead to his firing by the Minnesota Vikings.  A piece in Huffington Post looks at this development.  Here are highlights:

WASHINGTON -- The Minnesota Vikings released Chris Kluwe on Monday, leading to speculation that the move was motivated in part by the punter's prominent role advocating for gay rights.  "So long, Minnesota, and thanks for all the fish!" Kluwe tweeted Monday morning. "Thank you to all the fans, my teammates, and the Wilf family for the past 8.5 years. I wouldn't have traded it for anything."

Kluwe's release wasn't a complete surprise -- the Vikings drafted another punter late last month. But it's particularly notable because of Kluwe's increasingly high-profile role as an advocate for LGBT rights.

"Regardless of whether they admit it, the Vikings are jettisoning Kluwe partly because they grew tired of his outspokenness," wrote Minneapolis Star-Tribune columnist Chip Scoggins on Sunday. "It's naive to think the move is based solely on his age (31), salary ($1.45 million) or how he performed last season (inconsistently). Kluwe has become the most visible punter in NFL history because of his social activism."

Kluwe told Scoggins that if he were being jettisoned for his outspokenness, he would be fine with that outcome.

"I think the sacrifice would be worth it," he said. "Now, I would hope that I would get the chance to play football again, because I think I can still play. But if it ends up being something that costs me that position, I think making people aware of an issue that is causing children to commit suicide is more important than kicking a leather ball."

Kluwe's release comes after the Baltimore Ravens released Brendon Ayanbadejo, another prominent gay-rights advocate. Both are part of the group Athlete Ally, which works to end homophobia in sports.  Shortly after his release, Ayanbadejo said he believed his advocacy played a role in the Ravens' decision to let him go.

Kudos to Kluwe and Ayanbadejo.  I wish them the best of luck in the future.  As for the NFL and its teams, I will continue to hold it and them in low regard and a huge waste of time and money.

I'm sure his pro-equality stance has something to do with his being released. I hope he will be able to play again, if it's what he loves. But no matter what, he will always be able to look in the mirror and be proud of himself. He is the kind of man I have tried to raise my son to be.