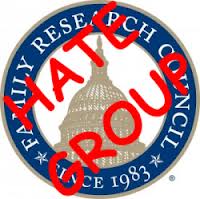 The Family Research Council is constantly whining over its designation as a hate group by the Southern Poverty Law Center, a designation that puts FRC in the same category as the KKK and other vile groups.  Yet time and time again FRC resorts to deliberate lies and anti-gay propaganda reminiscent of what Hitler's Nazi regime used against the Jewish members of European society, namely depicting Jews as diseased and "unclean."  With the Boy Scouts of America possibly on the verge of allowing gay scouts (but not gay scout leaders), the folks at FRC - which garners much of its income from promoting the threat of the "gay agenda" - are simply hysterical over the normalization of gays that this would represent.  Hence a new  “Stand With The Scouts” webcast  that FRC is peddling which is down right heinous.  Truth Wins Out looks at this nasty, untruthful attack on gays.  Here are some highlights:

Wingnuts have always been obsessed with purity and contamination, but this weekend’s little “Stand With The Scouts” webcast from the Family Research Council hate group is a doozy.

The first half of this supercut [below] (put together by Right Wing Watch) features a spooky pastor-like figure explaining that we are living at the “end of days.” It is worth noting that apocalyptic Christians have always believed that they are living in the End Times. It’s as silly now as it was in 45 AD. The next section features a Boy Scout who explains that gay sex is “unclean,” according to Boy Scout law.

Then Tony Perkins comes on to assert, based on no evidence besides the putrid thoughts in his brain, that DADT repeal has caused lots of problems in the military, and therefore the Boy Scouts shouldn’t change their policies.

Finally, another Scout does the “I’m so creeped out” thing, where he says “but iiiiii dunnnooooo what i would doooo if another Scout came on me!” Why they always think we’re interested in them, I do not know. It’s really kind of sad, as wingnuts don’t tend to be attractive people in heart, mind or body.