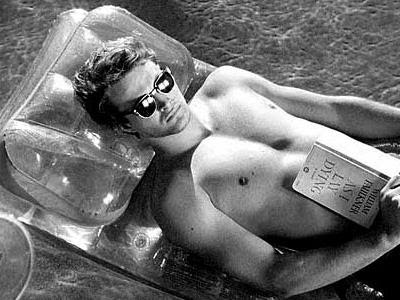 I'm not one for "outing" people after they have died, but at the same time until the lives and successes of gays from past generations becomes common place knowledge among society, it will continue make it easier for our enemies to malign us all collectively as freaks, perverts and whatever other derogatory terms folks in the anti-gay industry dream up.   While James Dean was perhaps not a role model in some ways, he was nonetheless a major stay who became a legend after his untimely death.  Thus, it is appropriate that the general public know the truth about who he was.  A new movie,  Joshua Tree 1951: A Portrait of James Dean, seeks to set the historical record straight.  Here are highlights from The Advocate:

What could possibly be left to say about late screen icon James Dean? After countless books, documentaries, and film bios, director Matthew Mishory thinks there’s plenty. Joshua Tree 1951: A Portrait of James Dean, his feature directorial debut currently making the rounds of film festivals around the globe, offers a breathtaking look at a little-known period in the actor’s life.

Set in the early 1950s when the charismatic Indiana native was just another determined hopeful, Mishory’s Dean (portrayed by The Gates star James Preston) depends on the kindess of well-to-do gentlemen friends, while experimenting sexually with his male roomate as well as numerous females. It’s a portrayal that will likely excite many fans of the mercurial star but upset others unready for the sexual frankness on display here — all told in glorious black-and-white cinematography.

We wanted to create a very intimate and perhaps unexpected portrait of who this man was. And that is the core of James Preston’s performance — actually conveying who James Dean was, not as an icon but as a person.

What is it about Dean that keeps people enthralled nearly 60 years after his death?
On the one hand, there is the sort of self-created mythology of James Dean as sensitive rebel bad boy that perhaps exists in at least one of the screen performances but largely was created through publicity photographs and the public imagination.  .   .  .   .  Dean continues to enthrall and always will because he fundamentally changed acting. He changed the way actors act on-screen. He brought a naturalism and an intensity to his performance that I feel didn’t exist before him. As many have pointed out, watching him act opposite his contemporaries, one often wonders if he is in an entirely different movie. Without Dean, we would never have had the great young method actors who followed — River Phoenix, for instance. So I think he fundamentally changed the way actors act and also the way Hollywood portrayed young people. The three Dean performances represent probably the first three truly realistic and compelling young characters in studio movies. Dean marks perhaps the first real American teenager put to film.

One area of Dean’s persona that’s still constantly debated is his sexuality. Do you think he privately conformed to some label? Was he bi? Was he gay?
One of the things I really like about our film is that you’ll never hear the words “gay” or “bisexual” or “heterosexual” spoken. You won’t hear any sexual labels expressed because we approach the topic of sexuality without any angst or hand-wringing at all. The characters are who are they are and were, and we leave any judgments or labels to the audience. That said, the notion that James Dean was nonheterosexual hardly begins with this film, and what is essentially common knowledge is, to my mind, entirely uncontroversial. One thing that so fascinates about this era, the late ’40s and early ’50s, especially among the Hollywood elite, is that people lived much more freely, sexually, than they do in our more conservative times. The great difference is that privacy still existed, so they did so behind closed doors. And of course there was an entire studio publicity machine in place to keep certain realities hidden from prying eyes.

Do you think that grappling with his sexual orientation really gave him insight into playing these tortured characters?
I think that, as James Preston has often remarked, Dean had no lack of pain to draw upon. His mother died horrendously of brain cancer when he was 8 years old. He had a father who probably didn’t love him enough and definitely didn’t know how to show it. And then he made his way to Hollywood, without a trust fund or family name, to chase a truly impossible dream  . . . .

James Preston gives a mesmerizing performance. How did you decide he was right to play Dean?
.   .   .  .  When we got to the callbacks, it was between James, who had come to us through [Joshua Tree actress] Dalilah Rain, and a few others. And when James came in we knew that we had our Jimmy. It wasn’t that he looked more or less like James Dean, although he did, and it wasn’t that he could do a mimicry or an impersonation, because we didn’t want that at all. James had a naturalism to his performance style that fit what we were trying to do.