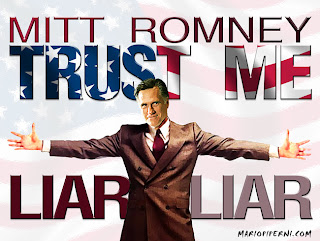 Another day and more damning commentary and conflicting statements from the Romney campaign.  Yes, I believe that Romney has lied through his teeth on his post 1999 involvement with Bain Capital and its management.  I likewise believe that the reason that Romney refuses to release his tax returns boils down to the simple fact that they must contain something Romney desperately wants to hide.  It may be obscene income levels or huge payments from Bain even as Romney continues to lie that he left the firm in 1999 despite SEC filings, video clips of Romney himself and other sworn statements to the contrary.  Here's a sampling of pundits on Romney's Bain fiasco.  First, Andrew Sullivan:

The claim that he committed a felony by falsely reporting his role at Bain Capital under oath is what has really gotten under Romney's skin. But it seems pretty clear to me that he signed a federal financial disclosure form, under the penalty of perjury, saying he had not been involved "in any way" with Bain after he left for Utah in February 1999. That's a strong statement. And it is directly undercut by Romney's own statement in his 2002 attempt to prove residency to run for governor:


Romney testified that “there were a number of social trips and business trips that brought [him] back to Massachusetts, board meetings” while he was running the Olympics. He added that he remained on the boards of several companies, including the Lifelike Co., in which Bain Capital held a stake until 2001...

So the question of whether Romney committed a felony in his financial disclosure form is a very real one - because Romney and Romney's lawyer provide the strongest evidence that it was perjury. Now we have more contemporaneous evidence that Romney perjured himself:


During the 2002 hearing — in a remark that has not been previously reported — Romney said that after he departed Bain in February 1999 he went through a transition period regarding his work in Boston.


When a lawyer challenging his eligibility asked Romney, "Did you remain more or less continuously in Salt Lake City from February '99 to the end of the year," Romney answered: "Actually, there was some transition away from my work in Boston for the first few months and then I pretty much stayed there after."

David Frum, a man who is no liberal Democrat adds in with these remarks:

It's not just his [Romney's] arguments that are weak. For the past year, we have watched him be pushed around by the radical GOP fringe. He's been forced to abjure his most important achievement as governor, his healthcare plan. In December, he was compelled to sign onto the Ryan budget plan after months of squirming to avoid it. Last fall he released an elaborate economic plan. On the eve of the Michigan primary, he ripped it up and instead accepted a huge new tax cut - to a top rate of 28% - that has never been costed (and that he now tries to avoid mentioning whenever he can). Romney has acknowledged in interviews that he understands that big rapid cuts in government spending could push the US economy back into recession. Yet he campaigns anyway on the Tea Party's false promise that it's the deficit that causes the depression, rather than (as he well knows) the other way around.

The hope for many of us was that a Republican president could do a better job constraining them than Barack Obama has been able to do - especially if (as I personally also hoped) the very act of electing such a president would deflate the radicalism of the congressional GOP and revive a more constructive spirit.

But at every point, Romney has surrendered to the fringe of his party. Weak. And now in his first tough encounter with Barack Obama, Romney is being shoved around again. This is not what a president looks like - anyway, not a successful president.


Then from a liberal perspective, we have Eugene Robinson in the Washington Post blasting Romney as well.  Here are highlights:

Mitt Romney has every right to cloak his personal and professional finances in secrecy — and voters have every right to assume he has something embarrassing to hide. If this seems unfair, Romney has only himself to blame.

Through a series of miscalculations, Romney has managed to turn what should have been a minor hiccup into what may be a defining moment, and not in a good way. Attacks by President Obama’s campaign serve mainly to draw attention to the train wreck.

On the Sunday morning talk shows, even Republicans urged Romney to release more tax returns while wondering what secrets he’s trying to keep. And the campaign’s latest attempt to explain how and when Romney left Bain Capital — he’s supposed to have “retired retroactively” at some unspecified date — became an instant punch line.

The only reason anyone cares when Romney left Bain Capital, the private equity firm he founded and ran, is because Romney made a totally unreasonable claim: When Democrats pointed to outsourcing and job cuts at companies Bain owned or controlled, Romney denied any responsibility since these unfortunate developments took place after he left to run the Winter Olympics in 1999.  This was an absurd position to take.

As late as 2002, Bain’s filings with the Securities and Exchange Commission list Romney as chairman, chief executive and sole stockholder.    If you look at Romney’s signature on those documents and listen to what he’s been saying on the campaign trail, you have to conclude that either he lied to the SEC or he’s lying to voters now.

All of this flows from a fundamental misrepresentation: Bain Capital’s purpose wasn’t to create jobs, it was to create wealth. If Romney had spoken honestly from the beginning about his company’s goals and actions, his campaign surrogates wouldn’t have to be out there trying to explain how retroactive retirement works.

Romney has spent the better part of a decade running for president. Did it never occur to him that if he ever won the Republican nomination, surely there would come a time when he was under pressure to release multiple years’ worth of tax returns?


The only reasonable conclusion to draw is that Romney believes that while stonewalling on his taxes may cost him some support, releasing them would cost him more.

Some conservatives are becoming restive; Weekly Standard editor Bill Kristol, for example, said Sunday that it was “crazy” for Romney not to release more than the one tax return he has grudgingly surrendered. If Romney is trying to hide something, what might it be? Could there have been more offshore accounts? Some additional undisclosed mansions? Might Romney have made some kind of profitable — but impolitic — bet against the U.S. economy?

Romney has created this disaster himself through lying and the probable unbridled greed that his tax return would document.  I for one cannot find a shred of sympathy for the man.
Posted by Michael-in-Norfolk at Monday, July 16, 2012