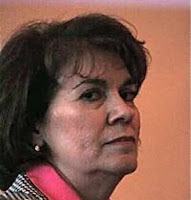 I've noted in prior posts on how Alan Cambers and the "ex-gays for pay" at Exodus International have taken a major step and admitted that reparative doesn't work and that there is no such things as a "ex-gay."  Sadly, Chambers and company continue to cling to the discredited Bible passages that have been used to stigmatize gays and label us as "sinners."  That said, the admission that reparative therapy is nothing but a huge fraud knowing perpetrated on the gullible and religiously brainwashed is huge.  And not surprisingly, the Bible thumpers and certified hate group leaders are veritably foaming at the mouth over Chambers/Exodus' belated honesty.  A case in point is hate group leader Linda Harvey (at left) who has ZERO, that's right ZERO credentials that make her a credible commentator on sexual orientation and/or medical and mental health issues (we traded e-mails some years back and she conceded her academic business background have ZERO to do with the things she now pretends to have expertise about).  Right Wing Watch looks at Harvey's attacks on Chambers and those who are willing to admit that the whole "ex-gay" storyline is a lie (Note: she claims thousands of gays have "changed" but offers up ZERO evidence):

Recently, the "ex-gay" organization Exodus International shocked the Religious Right when it announced that it would no longer promote so called "reparative therapy" which claims to help gays change their sexual orientation.

The announcement has, not surprisingly, angered professional anti-gay activists and today Linda Harvey lashed out at Exodus president Alan Chambers, saying that his admission that he still struggles with same-sex attraction demonstrates "very poor judgment" and blasting the idea that gays can be Christians because the Christian Church would never welcome a "compassionate pedophile":

For one, Chambers has said he doesn't believe a person can change his or her so-called sexual orientation. Now, there's not anything like this invented term called "sexual orientation" in Scripture in the first place, but then he also says that he still struggles himself with sexual feelings for other males. This shows very poor judgment as the leader of this ministry to, first of all, be experiencing this and secondly, to announce it to the whole world.

Of course a person can leave homosexuality; there are thousands of people who have done it and God's word clearly states that he can deliver us from sin. And the proud, open sinner who is publicly proclaiming it as good in defiance of God's word? It is highly questionable that such a person is saved.
...
We would not be making this exception for well-adjusted adulterers would we? How about a compassionate pedophile? What about incest like two brothers involved in homosexuality? Why not just defy God's word on this?