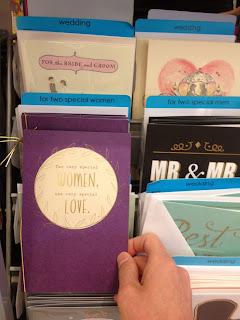 The list of boycott targets for American Family Association and the One Million Bitches crowd just got longer.  I can just imagine the spittle that will be flying when these gay haters realize that Target has added cards for same sex unions to their greeting card inventories nationwide.  Maggie Gallagher and Linda Harvey will have a cow and Robert Knight may well blow a gasket.  With a huge national retailer like Target making this move, it's yet another sign that over the longer term the hate "family values" groups and professional Christian set are losing the marriage equality battle.  Here are highlights from LGBT Nation:

The cards are addressed to: “Two very special women, one very special love” and “Mr. & Mr.” and included greetings which include “…a love story whose time has come! Congratulations.”

Company spokeswoman Molly Snyder said that “Target is focused on diversity and inclusivity,” and now offers a range of greeting cards that appeal to a variety of audiences, including the LGBT community.

The cards are made by Carlton Cards, a unit of American Greetings, whose spokeswoman Patrice Sadd said the company and Target jointly decided to offer “wedding cards relevant for everyone.”
The move is the latest step by Target to appeal to gay and lesbian consumers.

In November, Minnesotans will vote on a proposed constitutional amendment to define marriage as a union between a man and a woman. Target has not yet taken a position on the amendment, and said it’s going to remain neutral, having been burned by its political involvement in the past.