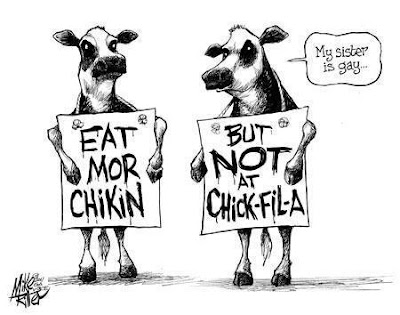 Dan Cathy, the chief operating officer of Chick-fil-A, said there is no denying that his company opposes marriage equality.

Cathy told the Baptist Press he aims to operate the restaurant chain "on biblical principles." When asked whether his company had an established position against marriage equality, Cathy said, "guilty as charged."
He added, "We are very much supportive of the family — the biblical definition of the family unit. We are a family-owned business, a family-led business, and we are married to our first wives. We give God thanks for that. ... We know that it might not be popular with everyone, but thank the Lord, we live in a country where we can share our values and operate on biblical principles."

The company has reported millions of dollars in donations to antigay groups including the Family Research Council and the Marriage and Family Foundation. Because of Chick-fil-A's ties to antigay organizations and causes, many LGBT people and allies are boycotting the restaurants, and plans to open a restaurant on the Northeastern University campus were quashed.