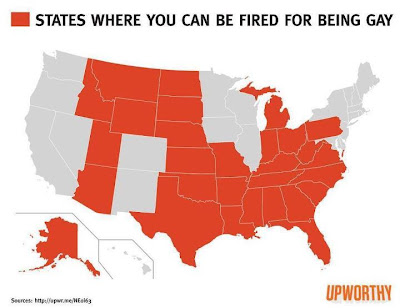 One friend from my former days in the GOP - we disagree politically greatly nowadays - often accuses me of being a "single issue voter."  That single issue in her mind is gay rights.  I respond by telling her that there are many issues involved (e.g., marriage rights, employment protections, tax law issues, the list goes on and on and involves over 1000 state and federal rights), so I'm anything but a single issue voter.  One of the most troubling issues remains the fact that LGBT individuals can be fired at will for no reason other than their sexual orientation in a majority of the states in this country.  It's a travesty and a perfect example of the special rights and privileges given to conservative Christian belief under this nation's laws.  Until this situation ends, there is no true religious freedom in the USA.
Posted by Michael-in-Norfolk at Saturday, July 21, 2012