As long time readers may recall, I am an advocate for tough gun control laws.  I guess my views were colored years ago by the utter disregard that hunters and gun rights advocates demonstrated toward private property rights years ago when I was growing up.  For newer readers, my folks had 50 acres of land and horses in Upstate New York when I was growing up.  And literally every year we diligently put up "posted" and "No trespass" signs on all of the boundaries to our property and every year hunters totally disregarded the signs, came on out property and made it dangerous for to go riding and made it dangerous for our horses.  The mind set seemingly hasn't changed and my brother in Keswick,Virginia has the same problem all these years later on his property and "hunters" even shoot onto his property from their vehicles - something that is very illegal. 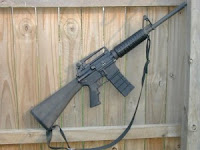 Despite this evidence that gun owners see themselves above the rules and the laws, we hear the time and time again mantra from the NRA and its puppets that "law abiding" citizens aren't the problem behind guns and massacres like that which occurred in Colorado in the early morning hours today.  But the truth is that they ARE the problem.  The shooter in the Virginia Tech shootings, the shooter in the Gabby Giffords shootings, and the shooter today, James Eagan Holmes (pictured above), ALL were law abiding citizens up until the time that went on shooting rampages.  And all of them legally purchased the weapons that the used to wreak death and terror on those they did not even know.


The simple truth is that NO ONE who is a peaceful, decent citizen needs to own an assault rife.  NO ONE.  Yet because of the efforts of the NRA and other far right elements, laws that might have prevented the needless, senseless deaths we've seen either have been killed or repealed.  Every politician who supports these insanely unrestricted gun purchase rights bears a portion of the responsibility for those who died today.  As Think Progress reports,   the Violent Crime Control and Law Enforcement Act of 1994 which was allowed to expire would have banned one of the weapons used by Holmes today.  Sadly, that law was allowed to expire due to the efforts of the NRA and its political prostitutes in Congress.  Guns ARE the problem.  True, control laws will not take guns away from all the criminals.  But they would stop the "lawful" purchases that seem to always be part and parcel with the mass shootings and murder that we continue to see across the country.  Here are highlights from Think Progress:

Holmes’ guns, including his AR-15, were all legally purchased since May from two national chains, Bass Pro Shops and Gander Mountain Guns.

Purportedly, the AR-15 used by Holmes had a high-capacity clip, which were banned as “large capacity ammunition feeding devices” in the 1994 legislation.


The irony isn't lost on me either that it is always the "conservatives," "godly Christians" and their political flunkies who wrap themselves in religiosity who always oppose meaningful gun control and set the stage for these mass slaughters of innocents.   The rights of innocent victims surely trumps antiquated 2nd Amendment rights that are part of the GOP's mantra of God, gays and guns.  It's yet another reason I cannot in good conscience be a Republican.
Posted by Michael-in-Norfolk at Friday, July 20, 2012