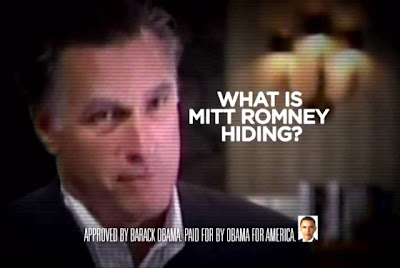 The feeding frenzy over Mitt Romney's refusal to release more tax returns continued to boil over today and CNN has an article that looks at what the hidden tax returns might reveal - none of which is good for Romney and his efforts to woo average Americans.  What's noteworthy is that several times in the article tax experts conjecture that Romney may have been guilty of violations of the tax law.  Yes, most Americans do not hold the IRS in high regard, but they have even less regard for tax cheats and law breakers.  Once again, given the political storm, I can only assume that Romney DOES have something to hide.  Hence the refusal to release more returns.  Here are highlights from the CNN article:

By announcing that he will release no further tax returns beyond his 2010 and 2011 returns, Mitt Romney appears to have exempted himself from the proud bipartisan tradition of presidential nominees displaying genuine financial candor with the electorate.


What is more, his disclosure to date is in the wrong direction: It is the release of Romney's past returns, not his current ones, that matters.

Either Romney has an unresolved father figure issue, or he has some special reason not to follow a tradition established by his father.

Given Romney's financial sophistication, it has been assumed by some that there cannot be any tax skeletons in his closet. His reluctance to disclose past returns, however, undermines that assumption. We are left with the difficult task of plausibly reconstructing his financial record based on the one full return that he has released. The result is troubling.

Romney's 2010 tax return, when combined with his FEC disclosure, reveals red flags that raise serious tax compliance questions with respect to his possible tax minimization strategies in earlier years. The release in October of his 2011 return will at best act as a distraction from these questions.  So, what are the issues?


Second, Romney's $100 million IRA is remarkable in its size. Even under the most generous assumptions, Romney would have been restricted to annual contributions of $30,000 while he worked at Bain. How does this grow to $100 million?   .   .   .   .   One possibility is that .  .  .  .  Romney stuffed far more into his retirement plans each year than the maximum allowed by law by claiming that the stock of the Bain company deals that the retirement plan acquired had only a nominal value.


Third, the vast amounts in Romney's family trusts raise a parallel question: Did Romney report and pay gift tax on the funding of these trusts or did he claim similarly unreasonable valuations, which likewise would have exposed him to serious penalties if all the facts were known?

Fourth, the complexity of Romney's one publicly released tax return, with all its foreign accounts, trusts, corporations and partnerships, leaves even experts (including us) scratching their heads. Disclosure of multiple years' tax returns is part of the answer here, but in this case it isn't sufficient. Romney's financial affairs are so arcane, so opaque and so tied up in his continuing income from Bain Capital that more is needed, including an explanation of the $100 million IRA.

Finally, there's the puzzle of the Romneys' extraordinarily low effective tax rate.   .   .   .  .   For 2010, the Romneys enjoyed a federal tax rate of only 13.9% on their adjusted gross income of roughly $22 million, which gave them a lower federal tax burden (including payroll, income and excise taxes) than the average American wage-earning family in the $40,000 to $50,000 range.

What the American people deserve is a complete and honest presentation by Romney of how his wealth was accumulated, where it is now invested, what purpose is served by all the various offshore vehicles in which he has an interest and what his financial relationship with Bain Capital has been since his retirement from the company. These are all factors that go to the heart of his character and values.

As I said, none of the conjectures are good for Romney.  Here's what Frank Rich suggests to Romney in a piece in New York Magazine:

Is there any major Republican, from George Will to Bill Kristol to Haley Barbour, who has not called for Romney to release more returns? Surely Romney himself is asking for more than two years of returns from the veep prospects he’s vetting. What Mitt doesn’t seem to realize is that whatever embarrassments are in his tax returns, the bigger problem is that his secrecy keeps accentuating all the mysteries in his resume: the erased hard drives he left behind when leaving office as Massachusetts governor; what exactly he did as a longtime lay official in the Mormon church; and, of course, what exactly he did and didn’t do at Bain and, for that matter, when he was there and not there. If he keeps trying to wait out the tax storm, it will keep growing — hitting a new peak when he finally releases the one additional year of tax returns he has agreed to disclose, and another when his veep pick is asked to release his or her tax returns.

The truth is that Romney isn’t really good about talking about anything, trivial or substantive. The five television interviews he gave last Friday to clarify his Bain record — instigated by his own campaign — were so tongue-tied, disingenuous and laced with corporate jargon (“entities” and whatnot) that they ended up doing more harm than good.   .   .   .   .    His strategy on NBC — to duck questions about his offshore finances by hiding once more behind his “blind trust” — was easily demolished. Just 72 hours later, Jon Stewart ran the 1994 clip in which Romney, then running against Ted Kennedy, dismissed a blind trust as “an age-old ruse” that can easily be manipulated by its beneficiary.

One is left with a sense that as a child of wealth and incredible privilege, Mitt Romney thinks that he's above the rules and laws that govern everyone else.  Candidly, I hope he holds out longer and that when additional returns are released that they include the map to some real bomb shells.  I truly like Romney as a person more and more with each passing day.
Posted by Michael-in-Norfolk at Wednesday, July 18, 2012