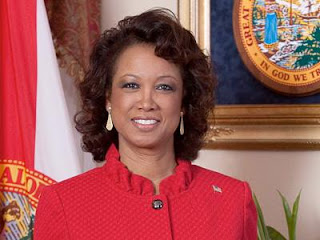 Usually it's the less than attractive GOP men who are seeking some hot same sex action on the side.  Now, in a new twist of the Republicans yearning for what they condemn on the campaign trial, Florida GOP Lieutenant Governor Jennifer Carroll, is fighting the fallout from a lawsuit in which Carroll is accused of firing a staffer who caught her in "a compromising position" with another woman in her capitol office. News reports naturally cite that Carroll is married with children - as if that proves a damn thing.  Given straight men and their apparent fascination with lesbian sex - just look at Playboy magazines - perhaps male Republicans will overlook the sordid tale.  It is  telling, however, that like closeted male Republicans Carroll has campaigned on an anti-gay agenda.  Here are highlights from The Advocate:

Jennifer Carroll, Florida's lieutenant governor, is accused of firing a staffer who caught her in "a compromising position" with another woman in her capitol office. But Carroll is denying it ever happened in emails sent to her supporters, according to Florida media.

Reuters first reported Thursday that former staffer Carletha Cole is engaged in a lawsuit and that in a court filing earlier this month revealed she had walked in on her boss with her travel aide, Beatriz Ramos, in "a compromising position" — a phrase used by Cole's lawyer in the filing.

Carroll, who is married with children, said in an email to a supporter released by the governor's office that she "will be fighting back." In another, she blames the media for reporting the accusation.

Carroll, a Republican, is a former state legislator and became the first female elected as lieutenant governor when joining Gov. Rick Scott on his ticket in 2010. She is also the first black politician elected to any statewide office.

She was famously critical of the media in a fiery sermon of a speech before the Faith and Freedom Coalition in September, when she called for a "righteous government."   Carroll did not talk about LGBT rights but did say, "these are very sad times when we allow the minority to poison the minds of the majority. This is exactly what dictators and socialist rulers did. When it comes to our Christianity, there is no gray area. It is either you believe or you don’t believe. And if you believe, you believe with all of your heart, all of your soul and all of your might."

Carroll, a Navy veteran, also told the conservative website Newsmax in September that she didn't agree with President Obama's decision to repeal the "don't ask, don't tell" policy. She said the military should have been left alone to decide how to proceed, without noting that the major military leaders actually supported DADT repeal.