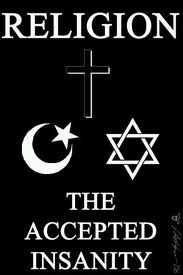 The extreme sickness of the far right Christians (using the term Christian advisedly with these folks) continues be revealed and one can only hope the sickness metastasizes and kills conservative Christianity in the long run.  What I am I talking about?  All the "godly Christians" who are blaming gays and liberal churches for the shooting early yesterday in Aurora, Colorado.  Forget about the ridiculous lax gun laws and the fact that deadly weapons with the sole purpose of automatic fire and efficient killing can be owned by and in the possession of virtually anyone without a criminal record.  Right Wing Watch looks at the batshitery and statements dripping with hate coming from the self-congratulatory modern day Pharisee crowd.  Here are highlights:

Fred Jackson, the American Family Association’s news director, while discussing the Colorado movie theater shooting today said that liberal Christian churches and liberal media helped contribute to violent incidents by supposedly deemphasizing the fear of God and the Bible. During AFA Today, Jackson had on as his guest Jerry Newcombe of Truth in Action Ministries to discuss his column on the AFA’s OneNewsNow blaming the shooting on a waning fear of God and Hell, and blamed the American Civil Liberties Union for destroying the public school system by supposedly forbidding students from reading the Bible.

Later in the program, Jackson and co-host Teddy James of AFA Journal said the shooting is a sign of God’s judgment for the failings of the public education system and liberal, mainline Protestant churches that affirm gays and lesbians.

Jackson: I think the sources of this is [sic] multifaceted but you can put it all I think under the heading of rebellion to God, a rejection of the God of the Bible. I think along with an education system that has produced our lawyers, our politicians, more teachers, more professors, all of that sort of thing, is our churches, mainline churches. We’ve been dealing Teddy and I know the AFA Journal has been dealing with denominations that no longer believe in the God of the Bible, they no longer believe that Jesus is the only way of salvation, they teach that God is OK with homosexuality, this is just increasing more and more. It is mankind shaking its fist at the authority of God.

James: And God will not be silent when he’s mocked, and we need to remember that.

Jackson: We are seeing his judgment. You know, some people talk about ‘God’s judgment must be just around the corner,’ we are seeing it.

With these kinds of untrue and in themselves violence inducing statements, it's little wonder that AFA has been registered as a hate group by the Southern Poverty Law Center - the same organization that tracks the KKK, other white supremacy groups and Neo-Nazi groups.   Today, to be a far right Christian puts one in pretty foul company.  And yet these assholes pat themselves on the back for their piety and godliness.  It's enough to make one want to vomit.
Posted by Michael-in-Norfolk at Saturday, July 21, 2012