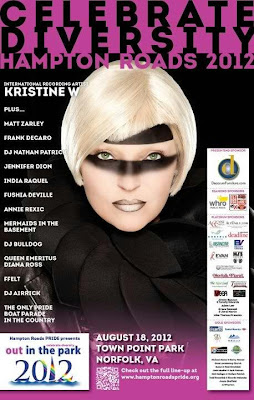 As a member of the board of directors of Hampton Roads Pride, one of the major tasks of the board each year is to put on "Out in the Park" - Hampton Roads' annual gay pride celebration.  After last year's successful event which saw attendance estimates as high as 17,000 people, the board needless to say feels pressured to put on an even more successful event for 2012.  We think that we are well on the way to doing so and have Kristine W and Matt Zarley as headliners and radio personality Frank Decaro from OutQ radio serving as master of ceremonies much of the day.  Full details of the event, event sponsors and why the event is important, especially here in Hampton Roads can be found here via VEER Magazine.

Given the subject of the prior post and the imporance that tolerace plays in an area's economic vitality, I set out below my piece from the VEER Out in the Park piece:

Last year’s presentation of “Out in the Park” by Hampton Roads Pride marked the first time that Hampton Roads has had a LGBT Pride event in a truly prominent venue. And the people did come out in numbers: between 14,000 and 17,000 depending on the estimate used. On Saturday, August 18, 2012, once again “Out in the Park” will take place in the prominent venue of Town Point Park. Some may wonder “Why Pride.” Why is this such a big deal and why is an event like Out in the Park is important? There are a number of reasons, in my view.

The first reason is the reality faced by LGBT Virginians each and every day. As a matter of state policy LGBT Virginians are stigmatized and discrimination is legally permissible. LGBT Virginian’s can be fired at will and have no employment non-discrimination protects. Similarly, LGBT tenants can face housing discrimination, and we receive zero legal recognition of our committed life partner relationships. For younger LGBT Virginians and those perceived to be gay, bully can be relentless with little protections afforded by Virginia’s current laws. If we needed any reminding of our second class citizenship, the recent handling of Tracy Thorne-Begland nomination to the District Court bench in Richmond served as a stark reminder. Although he is well respected and a very qualified Deputy Commonwealth Attorney with credentials superior to those of many sitting judges, Thorne-Begland was not approved by the Virginia House of Delegates for the simple reason that he’s a openly gay man. It is an atmosphere that can be corrosive to one’s very soul.

While Out in the Park does not address this shameful legal reality in Virginia, it can provide a much needed sense of solidarity. Sadly, too many individuals still feel forced to live “in the closet” whether they are members of the military or employed in the private sector. An event like Out in the Park which is open to all, LGBT and straight, allows these individuals an opportunity be themselves in a non-hostile, accepting environment. It also allows teens and youths to realize that they are not the freaks or misfits some among the Christian Right and elsewhere would have them believe themselves to be. For those of us who are “out,” a successful pride event is an opportunity to demonstrate our pride - and experience a sense of empowerment - at who were are in spite of the adversities one faces living in Virginia.

Out in the Park also represents an educational opportunity for the region and can boost its sometimes negative image. In 2010, a Brookings Institute study, Hampton Roads was described as “old, slow and not too bright.” If Hampton Roads wants to attract the so-called “creative class,” the best way to do so is to show that it is tolerant and open to diversity. Out in the Park goes some way towards putting aside Hampton Roads’ dowdy, conservative image. For those outside of the Hampton Roads LGBT community, the Out in the Park event will provide a venue for such individuals to learn that the LGBT community is very diverse with a wide spectrum of individual types and social, racial and professional backgrounds. This LGBT pride event can also educate businesses to the fact that they are overlooking a very significant segment of the community in their marketing plans and business models.

Hopefully, this second Out in the Park event in Town Point Park will further cement the positive experience generated last year.