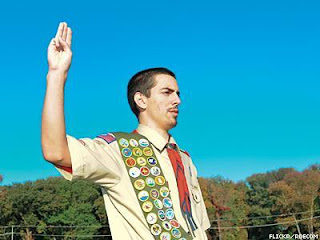 Some had hoped that in light of the changing levels of acceptance in American society and especially among the younger generations that the Boy Scouts of America would discard its anti-gay policy which has been used to expel both LGBT scouts and LGBT scout leaders.  Sadly, such hopes have been dashed and the Boy Scouts have reaffirmed the organizations naked anti-gay animus.  Yes, as a private organization the Boy Scouts are free to be bigots.  But I suspect that over the longer term, the policy of animus and discrimination will further marginalize scouting.  Here are highlights from ABC News:

After a confidential two-year review, the Boy Scouts of America on Tuesday emphatically reaffirmed its policy of excluding gays, angering critics who hoped that relentless protest campaigns might lead to change.
The Scouts cited support from parents as a key reason for keeping the policy and expressed hope that the prolonged debate over it might now subside. Bitter reactions from gay-rights activists suggested that result was unlikely.

The Scouts' national spokesman, Deron Smith, told The Associated Press that an 11-member special committee, formed discreetly by top Scout leaders in 2010, came to the conclusion that the exclusion policy "is absolutely the best policy" for the 102-year-old organization.

Smith said the committee, comprised of professional scout executives and adult volunteers, was unanimous in its conclusion — preserving a long-standing policy that was upheld by the U.S. Supreme Court in 2000 and has remained controversial ever since.

As a result of the committee's decision, the Scouts' national executive board will take no further action on a resolution submitted at its recent national conference asking for reconsideration of the membership policy.

Not surprisingly, the Boy Scouts organization has failed to disclose the membership of this secret committee that made the decision to continue a policy that is little more than anti-gay animus.  And my blogger friend and editor of The Bilerico Project, Bil Browning, wants to know the names of these 11 individuals or a confession that the committee is just a ruse to cover bigoted asses.  In a post on The Bilerico Project, Bil raises some disturbing questions about the secret committee.  He also calls for corporate big shots on the Boy Scout national board to resign.  Here are some excerpts:

The Boy Scouts of America announced today that they'd formed a secret committee back in 2010 to study whether or not to change their ban on gay scouts and leaders. The committee suggested the group keep their current discriminatory policy.

I'm calling bullshit. I don't believe them. Their story has too many holes in it to be remotely believable. This is a spin put in place to cover their ass at the recent blowback they've been getting as opinions change on gays and lesbians. There's more holes in their statements than a block of Swiss cheese.

First of all, anything decided by a secret committee isn't worth believing. If they truly think this is the best policy, why not release the names of the people who think so? Is it because the people involved don't want others to know they support discrimination? What's the reason for the secrecy?

Second, they say this secret committee was "comprised of professional scout executives and adult volunteers" and included "a diversity of perspectives and opinions." They also say the vote was unanimous. Do you know any supporter of LGBT rights who would decide that banning an entire group of people from an organization is a good idea? The majority of Americans support LGBT rights now. If that group included "diversity," I'm doubtful that vote would be unanimous. It just doesn't ring true.

Bryan Fischer of the American Family Association is touting that his organization - designated a hate group by the Southern Poverty Law Center - was consulted. I'd imagine an anti-gay group would be in favor of discrimination. But did the Scouts contact GLAAD? HRC? Courage Campaign? Any LGBT organization? If you're only contacting groups known to hate gays and lesbians, that's hardly a "diversity of perspectives." That's a circle jerk.

And lastly, they insist that the majority of the families involved in scouting supports the current policy. How do they know that? Did they do a survey for their secret committee?

And when they were consulting with these unknown entities outside of scouting, did they contact any health professionals that could have unequivocally told them that there is no danger to children from being around LGBT people? All the major medical groups support full LGBT equality and regularly smack down the bogus claims made by Fischer and his ilk.

So I'm calling bullshit. I don't believe they made a worthwhile effort to actually decide what's best for all children and everyone involved in scouting. They may have formed this "secret committee," but I'd posit they knew the outcome before they held their first meeting.

Two high profile board members have already announced their opposition to the policy. Both of them are corporate bigwigs and their companies donate a ton of cash to the group. These men should resign immediately - and take their corporate cash and fundraising abilities with them.


I for one will not make any contribution to the Boy Scouts or any organization that supports them.  Yes, they are free to be bigots and I am likewise free to boycott them and to strive to convince others to do likewise.

I didn't expect anything different. They're all worst-firsters who look for the absolutely most terrible thing that could POSSIBLY happen and since they're all top ranking homophobes, they assume all gays are pedophiles and child molesters, completely forgetting that most child abuse is at the hands of family members, yet fathers can still sleep in a tent with their own kids. Oh, and just let someone decide they don't like you so they accuse you of being some sort of "threat" - you're gone, no chance to defend, no due process, just "your membership has been revoked".

Sorry, could keep on ranting on the a$$holes that run the BSA, but will stop now.