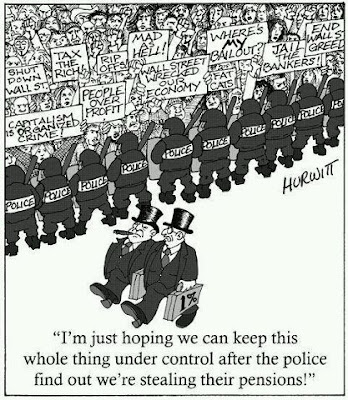 Mitt Romney's defenders are unhappy that the media - with the help of the Obama campaign, of course - is focusing on Romneys almost obscene wealth and his cynical and ruthless investment stratagems that cared nothing for the consequences other than how fast to make a buck.  Or more accurately, lots of bucks.  It's impossible to ever truly get inside of someone else's head, but Romney's career at Bain Capital is telling and it paints an ugly picture that ranges from betting against American businesses to throwing people out on the street without jobs.  A column in the New York Times notes why it IS appropriate to focus on these issues no matter how much Romney and his sycophants protest.  Here are excerpts:

A lot of people inside the Beltway are tut-tutting about the recent campaign focus on Mitt Romney’s personal history — his record of profiting even as workers suffered, his mysterious was-he-or-wasn’t-he role at Bain Capital after 1999, his equally mysterious refusal to release any tax returns from before 2010.

The story so far: Former President George W. Bush pushed through big tax cuts heavily tilted toward the highest incomes. As a result, taxes on the very rich are currently the lowest they’ve been in 80 years. President Obama proposes letting those high-end Bush tax cuts expire; Mr. Romney, on the other hand, proposes big further tax cuts for the wealthy.

The impact at the top would be large. According to estimates by the nonpartisan Tax Policy Center, the Romney plan would reduce the annual taxes paid by the average member of the top 1 percent by $237,000 compared with the Obama plan; for the top 0.1 percent that number rises to $1.2 million. No wonder Mr. Romney’s fund-raisers in the Hamptons attracted so many eager donors that there were luxury-car traffic jams.

What about everyone else? Again according to the policy center, Mr. Romney’s tax cuts would increase the annual deficit by almost $500 billion.  .   .  .   Realistically, those big tax cuts for the rich would be offset, sooner or later, with higher taxes and/or lower benefits for the middle class and the poor.

So as I said, this election is, in substantive terms, about the rich versus the rest, and it would be doing voters a disservice to pretend otherwise.

How are voters supposed to know who’s telling the truth? In fact, earlier this year focus groups given an accurate description of Mr. Romney’s policy proposals refused to believe that any politician would take such a position.  .   .   .    Trust me: you will see very few news analyses saying that Mr. Romney proposes huge tax cuts for the rich, with no plausible offset other than big benefit cuts for everyone else — even though this is the simple truth.

So how can the Obama campaign cut through this political and media fog? By talking about Mr. Romney’s personal history, and the way that history resonates with the realities of his pro-rich, anti-middle-class policy proposals.  Thus the entirely true charge that Mr. Romney wants to slash historically low tax rates on the rich even further dovetails perfectly with his own record of extraordinary tax avoidance — so extraordinary that he’s evidently afraid to let voters see his tax returns from before 2010.

[T]alking about Mr. Romney’s personal history isn’t a diversion from substantive policy discussion. On the contrary, in a political and media environment strongly biased against substance, talking about Bain and offshore accounts is the only way to bring the real policy issues into focus. And we should applaud, not condemn, the Obama campaign for standing up to the tut-tutters.