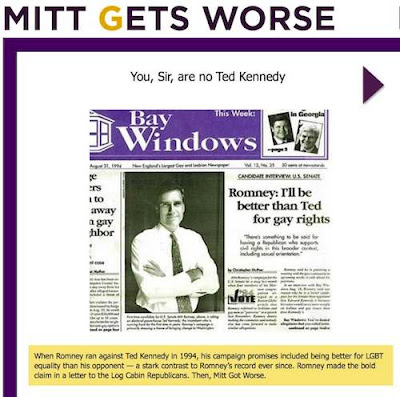 A new effort to educate Americans about Mitt Romney's extreme anti-gay, pro-bigotry agenda has been launched.  “Mitt Gets Worse” is a super PAC partnership between the American Bridge 21st Century and the Courage Campaign.  Besides clearly demonstrating that Romney is a nightmare for LGBT rights, the campaign underscores Romney's willingness to lie over the years to pander to whatever interest group and/or demographic group he thinks will bring him votes.  The man doesn't have a genuine bone in his body - or at least not one associated with greed and vulture capitalism.  The New Civil Rights Movement looks at this new endeavor to wake people up to the real Mitt Romney.  Here are highlights:

Four leaders within the LGBT community are helping to launch Mitt Gets Worse with their personal testimonials in what they’re calling an “oral history project and rapid response campaign.”

Adam Bink, Director of Online Programs at Courage Campaign joins Kathleen Henry, who was the chair of the Governor Mitt Romney’s Massachusetts Commission on Gay and Lesbian Youth — until he rescinded the executive order that created the commission. Also premiering on the Mitt Gets Worse website are Julie Goodridge, a lead plaintiff in Goodridge v. Dept of Public Health — the lawsuit that brought same-sex marriage to Massachusetts, and Jennifer Chrisler, Executive Director of the Family Equality Council.

[T]hey will be publishing more first “person accounts of LGBT activists and organizers who have played key roles in this fight,” the Mitt Gets Worse campaign states:


Year after year, Mitt has moved further and further toward the extreme right. The Mitt Gets Worse campaign is an oral history of Mitt Romney’s efforts to diminish the rights and the freedoms of LGBT Americans, told by supporters, activists, and LGBT advocates that have personally been impacted by Mitt’s anti-equality agenda.


Many believe Romney secretly supports LGBT civil rights — just as many believed George W. Bush did before, and during, his campaign and subsequent eight years in the White House. Regardless of what we think our elected leaders believe, it’s clear that the Republican party has become ruled by far right wing radicals and religious zealots.

Romney’s recent failure to stand up to them when he had his first chance — during the six days Richard Grenell was the national security spokesperson for Mitt Romney’s campaign, until the infamous Bryan Fischer forced Romney to fire him, or let him resign (whichever you want to believe.)

Romney has proven time and time again that he will not stand up to special interests, and will say and do anything to get elected. Why would he be any different on LGBT civil rights — when he’s repeatedly sold us down the river?