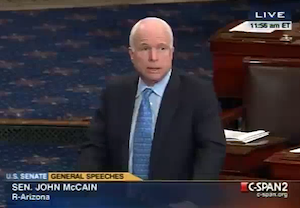 There are times that I wonder why Michele Bachmann isn't in a mental institution.  The same question applies to the lunatics and apparent knuckle dragging voters in her district who continue to vote this mentally ill loon into Congress.   Michele Bachmann's latest fixation - she's apparently taking a brief break from her anti-gay jihad - is the fantasy that Muslim terrorists are infiltrating the government with a goal of imposing Sharia law, i.e., the Islamic equivalent of the Christian dictatorship that Bachmann and her fellow Christofascist nutcases want to inflict on all Americans.  Bachamnn's lunacy was so unfounded and over the top that John McCaim felt compelled to bitch lap Bachmann on the Senate floor.  First these highlights from Think Progress followed by a video clip of McCain taking Bachmann to task:

On the floor of the Senate Wednesday, Sen. John McCain (R-AZ) repudiated Rep. Michele Bachmann’s (R-MN) McCarthyesque witch-hunt to root out the alleged Muslim Brotherhood infiltration of the U.S. government. The flap started when Bachmann all but directly accused Secretary Hillary Clinton’s top aide Huma Abedin of working on behalf of the Muslim Brotherhood in a letter with four colleagues to the State Department’s Inspector General demanding an investigation.

Enter McCain, who put his foot down today and chided his fellow Republicans for the accusations against Abedin. McCain brought up his personal relationship with Abedin, adding that she “represents what is best about America.” He noted Bachmann’s letter and its sourcing to a report from notorious Islamophobe Frank Gaffney‘s Center for Security Policy (CSP). He then said:


To say that the accusations made in both documents are not substantiated by the evidence they offer is to be overly polite and diplomatic about it. It is far better, and more accurate, to talk straight: These allegations about Huma Abedin, and the report from which they are drawn, are nothing less than an unwarranted and unfounded attack on an honorable citizen, a dedicated American, and a loyal public servant.

Rep. Keith Ellison (D-MN) lead the charge against Bachmann, demanding “credible, substantial evidence” to back up her accusations. Bachmann then penned a long letter responding to Ellison, which he rightly dismissed as “16 pages worth of repeated false allegations. Just regurgitated nonsense.”