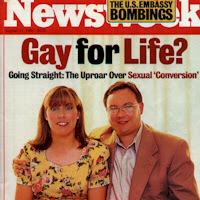 As even casual readers of this blog will quickly figure out after a few visits, I am vehemently against those organizations that disseminate the deliberate lie that gays can "change" their sexual orientation by "accepting Jesus" or other forms of pretend therapy that aren't much better than something an African witchdoctor might offer up.    And sadly, these organizations seem to always find down and out gays and lesbians who blame all their problems on their sexual orientation rather than their alcoholism, drug addict, or other unrelated problems.  The "ex-gay" ministries prey on these individuals and quickly give the outward respectability and transform them into what I refer to as "ex-gays for pay."  Generally, they have no other livelihood and become trapped in the lie and the "change" myth.  And they often marry spouses of the opposite gender and in some cases have children - all in a desperate effort to prove to themselves and their employers that they have become "ex-gay."


Sooner or later, the pretense and self-delusion falls apart and these individuals have to face the reality that they are and always will be gay and that they need to stop lying.   I've been in this place where the lies simply cannot be sustained any longer.   It's a nightmare for all involved.   It looks like this reality is catching up with the "ex-gay" couple who appeared on the cover of Newsweek and proclaimed that gays can indeed change.  Truth Wins Out looks at the apparently disintegrating marriage of John and Ann Paulk.  Here are highlights:

Ex-gay” poster couple John and Anne Paulk may be Splitsville.  Sources tell Truth Wins Out today that John has moved out of the couple’s Portland, Oregon home. Other sources in Portland have informed Truth Wins Out that Paulk was dating a man, although the current status of that relationship remains murky, and that Paulk has frequented homosexual establishments in the city.

Speculation on the status of their relationship was heightened today after TWO spotted a cryptic status message posted by John Paulk on his business’s Facebook page:


“After a lifetime of heartache, July 19, 1992 [the date he married Anne] was the happiest day of my life. I will never forget it… It is emblazoned in my memory. And although a lot has occurred since that day long ago and I am on a hard journey right now, i want this woman to know how much she has always meant to me and that no matter where things pan out… I always will love you.”

John Paulk is the former chairman of Exodus International, who was photographed by me in Mr. P’s, a Washington, DC gay bar on September, 19, 2000. Anne was part of the 1998 Truth in Love campaign and was featured on the cover of Newsweek with John, and in a full page New York Times ad under the headline, “I’m Living Proof That Truth Can Set You Free.” Additionally, John was the founder of Focus on the Family’s “ex-gay” roadshow, Love Won Out, and the couple has a book by that name. The Paulk’s have three sons and John runs a catering business.

John, a former drag queen, found Jesus one drunken night on a gay bar dance floor while high on poppers.   .   .   .   .   There was speculation that John was creeping back out of the closet when he dyed his hair and lost weight. In his book, Not Afraid to Change, Paulk attributed weight gain to becoming “ex-gay.”

The question is, will Focus on the Family admit failure and apologize if their former poster boy comes out of the closet?  It is doubtful. As I have stated numerous times, these groups love to show you the “ex-gay” wedding photos, but they never show you the divorce papers.

I do indeed have sympathy for John Paulk and others like him who were cynically used by Christianist organizations who continue to support the lie that gays can change for purely political - i.e., if one can "change," then no legal protections are needed - and monetary reasons.   Yes, these victims allowed themselves to be used, but in someways pretending to be what everyone tells you that you should be seems the easier course of action.  But over time, it is a corrosive, soul killing experience that in my case made death look far preferable to living. Even if one does love their spouse, as I did my former wife.  She was as much a victim of the "change" myth as I was.  The worse thing is that all this hurt and needless suffering goes on simply because some people - i.e., the "Godly Christians" - only feel good about themselves when they are denigrating and looking down on others.  And then, there are the self-loathing closet cases in the Catholic Church hierarchy that only are happy when they make everyone else as miserable as they are.  It's sick.  Very sick.