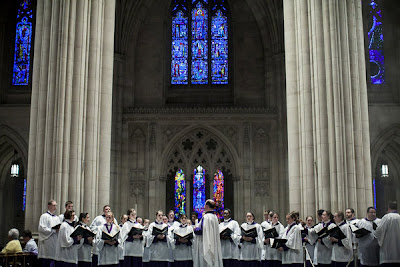 An op-ed in the New York Times looks at the decline of liberal Protestant denominations and is critical of these churches that are trying to change with the times and society.  But the malaise isn't limited to liberal denominations - e.g., Episcopal Church, ELCA, etc. - and the Catholic Church in the USA would have recoded significant declines but for the influx of Hispanic immigrants.  With that wave of immigration slowing, the real story may begin to make itself evident.  On the conservative end of the spectrum, the Southern Baptist Convention is struggling as younger members leave once they go off to college.  Yes, some of the mega churches are growing, but having gone to some of them in the past, they seem most focused on the prosperity gospel and provide services that are more akin to a stage production than any traditional connotation of a church service.

Personally, I believe the real problem for Christianity is that it is based on a book that is increasingly shown to be untrue -the scientific evidence of the non-existence of Adam and Eve is perhaps the most damaging example of late.  With out the fall of man as focused on Adam and Eve, the entire redemption story line leading to Christ falls apart.   Church then ultimately becomes a social outlet that people go to in order to feel better about themselves or on occasion do good works.  With more and more competing social outlets, the attraction simply is falling away.  That leaves denominations left with fear and/or instilled guilt - specialties of the Roman Catholic Church - as the only real stick to keep people coming through the door.  And with the decline of liberal denominations, the intolerant, generally hate-filled message of far right churches increasingly becomes the face of Christianity.  The result? Almost a third of the milennial generation has walked away for organized religion because of its ugly image and ugly conduct towards so many in society.  Here are some op-ed highlights:

IN 1998, John Shelby Spong, then the reliably controversial Episcopal bishop of Newark, published a book entitled “Why Christianity Must Change or Die.” Spong was a uniquely radical figure — during his career, he dismissed almost every element of traditional Christian faith as so much superstition — but most recent leaders of the Episcopal Church have shared his premise. Thus their church has spent the last several decades changing and then changing some more, from a sedate pillar of the WASP establishment into one of the most self-consciously progressive Christian bodies in the United States.

Yet instead of attracting a younger, more open-minded demographic with these changes, the Episcopal Church’s dying has proceeded apace. Last week, while the church’s House of Bishops was approving a rite to bless same-sex unions, Episcopalian church attendance figures for 2000-10 circulated in the religion blogosphere. They showed something between a decline and a collapse.


This decline is the latest chapter in a story dating to the 1960s. The trends unleashed in that era — not only the sexual revolution, but also consumerism and materialism, multiculturalism and relativism — threw all of American Christianity into crisis, and ushered in decades of debate over how to keep the nation’s churches relevant and vital.

Traditional believers, both Protestant and Catholic, have not necessarily thrived in this environment. The most successful Christian bodies have often been politically conservative but theologically shallow, preaching a gospel of health and wealth rather than the full New Testament message.

But if conservative Christianity has often been compromised, liberal Christianity has simply collapsed. Practically every denomination — Methodist, Lutheran, Presbyterian — that has tried to adapt itself to contemporary liberal values has seen an Episcopal-style plunge in church attendance.


But if liberals need to come to terms with these failures, religious conservatives should not be smug about them. The defining idea of liberal Christianity — that faith should spur social reform as well as personal conversion — has been an immensely positive force in our national life. No one should wish for its extinction, or for a world where Christianity becomes the exclusive property of the political right.

What should be wished for, instead, is that liberal Christianity recovers a religious reason for its own existence. As the liberal Protestant scholar Gary Dorrien has pointed out, the Christianity that animated causes such as the Social Gospel and the civil rights movement was much more dogmatic than present-day liberal faith.

Frankly, I believe the decline is irreversible and will likely accelerate as the backward and reactionary conservative denominations drive even more members of the younger generations away from organized religion entirely.