Quote of the Day: Andrew Sullivan on Romney's Bain Fiasco 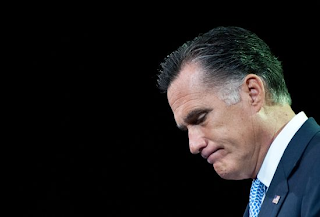 As I've acknowledged before, I have zero sympathy of Mitt Romney who I view as a cynical calculating liar.  He will literally say anything that he deems expedient. And as his Bain "problem" intensifies, I can only savor every moment that Romney twists on the rope of his own making.  He's knowingly lied, he's contradicted himself, and he's had his minions lie for him.  Now, it's deservedly biting him in the ass big time.  Andrew Sullivan sums up the situation, particularly the double standard that Mitt "Pinocchio" Romney would inflict on Barack Obama:

So either Ed Gillespie and Romney are lying now, or Romney and his lawyer were lying then. Which is it? They were and are obviously trying to have it every which way to suit whatever purpose at the moment. But legally, CEOs are responsible for their companies, whether they are managing them full time, part time or even retroactively retiring while managing them. Period. The buck stops with the CEO, just as much as it stops with a president. As a Bain partner at the time said today:

Romney, in other words, doesn't have a leg to stand on. He has been running a campaign against the "Obama economy" insisting that the president own every single month he has been in office in order to condemn his economic management all the more - despite at least a first year in which Obama cannot really be held responsible for the fallout of an economic collapse he inherited. So Romney insists on maximal responsibility for Obama and the economy.

But responsibility for Bain? Think about it. No one disputes that Romney co-founded Bain, hired most of its staff, and honed its methods and strategies from 1984 to 2002. No one can dispute that he was paid at least $100,000 from 1999 to 2002 for being CEO. There is no massive difference between the kind of strategies Bain pursued from 1984 to 1999 when Romney was managing full-time and from 1999 to 2002, when he was managing part-time and by his own lawyer's assertion that his Bain activities "continued unabated just as they had." Is Romney saying that nothing that happened at Bain after 1999 is his responsibility but that everything that happened after January 2009 is all Barack Obama's fault?

Yep, that's what he's saying. It's a pathetic double standard argument from a suddenly pathetic and panicking campaign. The only way he can dig out of this hole - yes, Bill Kristol is right - is to release 12 years of tax returns just as his father did. Until he does, the Obama campaign has every right to double and triple their insistent criticism of Romney's Bain record. And there will be more and more blood in the water.

Will Romney release his tax returns?   I for one am not holding my breath.  One simply does not act as if he's hiding something - in this case whatever picture will be shown by Romney's tax returns - unless they have something to hide.  I fully believe that Romney will not release his tax returns either (i) because they will confirm his continued Bain involvement or (ii) because they would show a level of income that would shock the conscience of most Americans.  Either way Romney loses big time.
Posted by Michael-in-Norfolk at Sunday, July 15, 2012