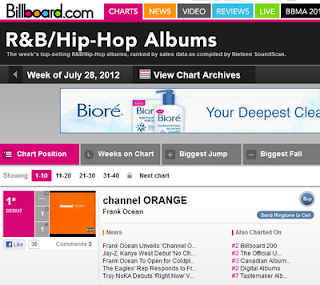 For far too long the conventional wisdom has been that being openly gay kills one's chances for success.  Yes, there has been some truth to the view - I was forced from a large law firm after coming out since "a gay partner might offend the sensibilities of conservative clients."  But on the other hand my client base of Hindu, Muslim and even some far right christian organizations has continued to grow with no apparent damage from my refusal to hide in the closet.  Google my name and seriously, it's hard not to know I'm gay.  Yet time and time again many new clients say they found me on the Internet.  Others are referred by existing clients who I strongly suspect know I'm gay.  They simply don't care as long as I'm good at representing their interests.


Now, in the entertainment realm, a new first has occurred: an out artist has debuted at the top of the Billboard charts.  This follows the success of actors and actresses who are "out" with no apparent damage to their careers.  The knuckle dragging Neanderthals may avoid them, but most of society, like my clients, simply don't care.  I hope other entertainers and those in other industries take note and refuse to remain closeted.  Here are some highlights from Billboard:

Frank Ocean, the singer among rappers in the alternative rap collective Odd Future, plants his debut studio album, "channel ORANGE," at No. 1 on the R&B/Hip-Hop Albums chart with 131,000 sold, according to Nielsen SoundScan. With an initial projected opening sales week of 40,000, overflowing support came in after Ocean's tumblr announcement regarding his sexuality.  Ocean also debuted at #2 on the Top 200 Pop Albums chart.

I continue to believe that the most powerful form of activism most of us can undertake is to live our lives openly with pride and dignity.  By doing so, we change hearts and minds and kill the stereotypes that our enemies seek to inflict on us.

Email ThisBlogThis!Share to TwitterShare to FacebookShare to Pinterest
Labels: changing hearts and minds, coming out, coming out journey, living out and proud, music, out celebrities