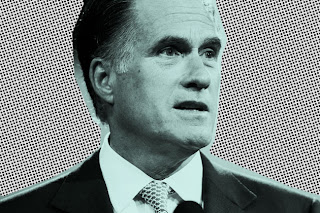 I suspect some readers may think I am beating a dead horse, but Mitt Romney's Bain problem continues to metastasize.  Now a growing number of conservative pundits are almost screaming at Romney to release his tax returns - 12 years worth in some cases.  Even National Review is now stating that Romney must either release the tax returns now or later after further self-inflicted damage has been inflicted.  Ultimately, the question becomes that of what is Romney hiding?   If there is nothing damaging in the tax returns, then why the continued refusal.  I've always believed that those who act as if they are hiding something usually ARE hiding something.  Thus, the speculation continues to grow.  Were there years when Romney paid no taxes?  Or were there years when obscene levels of income yielded taxes at a lower rate than that paid by many working class families.  Here are highlights from a National Review editorial entitled "Release the Returns":

Romney argues that whatever he releases will not be enough to satisfy the Obama campaign and its factota in the media, who are, once again, proving their bias and double standards. Romney is right, but he should release the returns anyway. Let them go fish.

If there is scandal to be had of that, it can be had from the information that already is available. But there is no scandal in that: Romney is a wealthy man — and he has complicated personal finances, something that is typical of wealthy men. In fact, Romney’s personal finances are a very good case study in what’s wrong with the American tax system and regulatory climate.

The Romney campaign says he has released as many returns as candidate John Kerry did in 2004, and cites Teresa Heinz Kerry’s refusal to release any of her tax returns. Neither is an apt comparison. John Kerry actually released returns from 1999 through 2003, and also released tax returns during his Senate runs. As for Teresa Heinz, Romney isn’t the wealthy spouse of a candidate, but the candidate himself.

Romney protests that he is not legally obliged to release any tax returns. Of course not. He is no longer in the realm of the private sector, though, where he can comply with the letter of the law with the Securities and Exchange Commission and leave it at that. Perceptions matter.

Romney may feel impatience with requirements that the political culture imposes on a presidential candidate that he feels are pointless (and inconvenient). But he’s a politician running for the highest office in the land, and his current posture is probably unsustainable. In all likelihood, he won’t be able to maintain a position that looks secretive and is a departure from campaign conventions. The only question is whether he releases more returns now, or later — after playing more defense on the issue and sustaining more hits. There will surely be a press feeding frenzy over new returns, but better to weather it in the middle of July.

It is to President Obama’s advantage to fight the election out over tactics and minutiae. By drawing out the argument over the returns, Romney is playing into the president’s hands. He should release them, respond to any attacks they bring, and move on.

This [the National Review statement] is such obvious advice that the real question becomes: what on earth could be so damaging that Romney would risk this agonizing twist in the wind? Did he pay no taxes at all in 2009? Or in some other year? Meanwhile, TP has listed 15 prominent Republicans calling for the release of the returns - including Ron Paul, George Will, Haley Barbour, Brit Hume and Michael Steele. This crack in the ranks means that some kind of release is all but inevitable - the Palin strategy is not going to work here.

The trouble is: it cannot be populist to hide most of your tax returns when you are running for president. Even Hannity is going to have a hard time justifying that one. Sure you can rail against the MSM. But in this case, the MSM includes Bill Kristol, Haley Barbour and National Review.