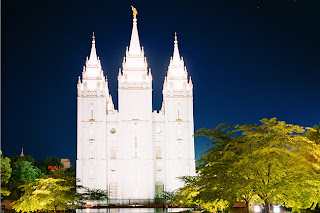 It's only to be expected that some of Mitt Romney's fellow Mormons would rally to his support in the current presidential contest.  The irony, of course, is that the family histories of many of these "first families" makes a mockery of Romney signing onto the National Organization for Marriage's anti-gay manifesto.  And these family histories also most definitely demonstrate the lie of Romney's repeated statements against same sex marriage (one of many lies from Romney) wherein he claims that throughout recorded history, marriage has always been between "one man and one woman."  Romney apparently has amnesia as to his own genealogy and that of his fellow Mormons.  Or perhaps they retroactively withdrew from polygamy.  The New York Times looks at these "first families" and their role in Romney's political aspirations.  Here are some excerpts:

In the mid-1800s, newly converted families from across the United States and Europe gathered in the growing Mormon town of Nauvoo, Ill., to help their prophet, Joseph Smith, build a New Jerusalem.

Now, more than 150 years later, descendants of those first families of Mormonism are joining together in a new effort: delivering the White House to Mitt Romney.

These families — Marriotts, Rollinses, Gardners and others — have formed a financial bulwark and support network for Mr. Romney at every important point in his political career. Starting with his 1994 Senate race, moving into the 2002 Salt Lake City Olympics effort that became his political springboard and continuing through his first foray into presidential politics, they have been there to open doors, provide seed money and rally support.

Mr. Romney’s candidacy has produced great pride among many Mormons, known officially as members of the Church of Jesus Christ of Latter-day Saints. But for this core group of the religion’s most prominent families, the ties to Mr. Romney go deeper. They share with him not only a faith, but also a dramatic history in which they have scaled the ladder of American society,  .  .  .  .

In interviews, several of Mr. Romney’s supporters expressed their concerns that attention to the financial support he has received from other early families of the religion would raise old prejudices and accusations of clannishness that followed their forebears.

On the manifests of the wagon carts that made the difficult trek with Young and then helped settle Utah were names that now dot the campaign filings for Mr. Romney and the political groups that support him.

Mr. Eyre said the main attraction to Mr. Romney for most Mormons is their “common values” with him, not their “common faith.” But he nonetheless described a “giddiness” over his prospects.

“It’s like an arc where the steps to mainstream understanding and inclusion were so small for so long — unfairly small, because other groups’ arcs seemed to move faster,” he said. “And now suddenly there is this big chance that the arc will complete itself very swiftly and very powerfully.”

I am by no means anti-Mormon.  I do believe, however, in telling the full story.  And sadly, the Times piece doesn't note that almost all of these families involved polygamous marriages.  I guess it would have underscored Romney's hypocrisy on same sex marriage too heavily even for the Times' taste.
Posted by Michael-in-Norfolk at Tuesday, July 17, 2012