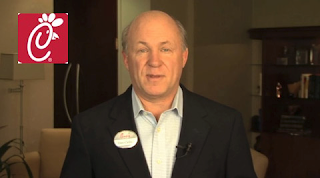 First Chick Fil-A's senior management admits that the company funds anti-gay organizations.  Now, Chick Fil-A President has gone further and engaged in a rant about gays and gay marriage inviting God to smite America.  And every single person who buys anything at Chick Fil-A is funding this kind of animus and bigotry.  Hence why I've boycotted this poisonous food chain for many years.  Patronizing Chick Fil-A is like a black patronizing a KKK owned business or someone of the Jewish faith supporting a Neo-Nazi owned business.  Here are some of Mr. Cathy's remarks and the comments of my blogger friend Jeremy Hooper at Good As You:

I really do think that the comments I unearthed yesterday are really worth heightened note, so I have no problem building on them. To remind you, this is what company president and COO Dan Cathy said about those of us who support marriage equality for same-sex couples (and about single parents):


"(1:05)…I think we are inviting God's judgment on our nation when we shake our fist at Him and say 'we know better than you as to what constitutes a marriage' and I pray God's mercy on our generation that has such a prideful, arrogant attitude to think that we have the audacity to define what marriage is about"

Dan Cathy's comments are obviously disturbing, regardless of broader context. But when one considers the context in which they were delivered, these comments really do show us, without any shred of doubt, where a major American fast food chain places LGBT people, our lives, and our loves within the societal realm.


Here's what I mean. These latest comments came from a media appearance that Dan Cathy made just a few weeks back. These were not words that I had to dig up from some secretive source or haul out from the WayBack Machine—these were pointed comments delivered on a radio show after a two year period where this particular company has come under great scrutiny for its actions and contributions in regards to LGBT rights. Mr. Cathy is well aware of the controversy, and has even made disingenuous videos and issued responsibility-shirking press releases denying that the company holds such view. But now, as he tells Baptist Press, the President and COO seems to be taking a "guilty as charged" stance. He, the head spokesperson for this company, appears to have embraced defiance, which takes this whole thing to another level entirely.

What Chick-Fil-A is no longer free to do? Deny that there is animus for LGBT people within the top offices of the family that runs the whole operation. Dan Cathy looked a concerned customer base in the eye and doubled down on the idea that gays are "shaking a fist" at God. That is now a very public part of the company's DNA. Plausible deniability is completely off the table.

Email ThisBlogThis!Share to TwitterShare to FacebookShare to Pinterest
Labels: anti-gay bigotry, Bible as a message of hate, boycott of anti-gay companies, hate and bigotry, Jeremy Hooper, religion as an evil