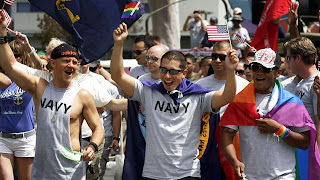 OMG!  U. S. military troops are going to be allowed to march in uniform in thee San Diego Pride parade.  I'm sure that when she hears this news Elaine Donnelly will have to be rushed to the emergency room in a seizure like state with spittle running down her cheeks.  For newer readers, Elaine Donnelly is basically a one person show that parades around under the self-created title of President of the Center For Military Readiness claiming that openly gay service members will destroy the U. S. military.  As is the norm for conservative faux experts, Donnelly has absolute ZERO military service background herself yet pontificates as if she was a retired four star general.  In reality, she - like Maggie Gallagher and Tony Perkins - is a professional gay hater who will disseminate any and all kinds of lies to denigrate and marginalize LGBT Americans.   God forbid that the large public see gays and lesbians as loyal, patriotic Americans who look just like everyone else.  Oh, the horror!!!  Sadly, the Pentagon is saying that allowing uniformed troops in the Pride Parade will be a one time event.  Here are highlights from the Los Angeles Times:

An announcement from the Office of the Deputy Assistant Secretary of Defense said that wearing their uniforms is permitted "provided service members participate in their personal capacity and ensure the adherence to miltary service standards of appearance and wear of the military uniform."

The decision marks the first time that gay personnel will be permitted to wear their uniforms in a gay parade.
Saturday's parade through the Hillcrest neighborhood is San Diego's first gay pride parade since the repeal of the "don't ask, don't tell" rule that prohibited gay military personnel from serving openly.

Dwayne Crenshaw, executive director of San Diego Pride, said the Pentagon's decision "is a giant leap in the right direction'' toward full equality for gays and lesbians in the military.

Military rules bar personnel from wearing their uniforms in any way that will "bring discredit" to the armed services or appears to take sides in a political issue.  The announcement ensures that all military personnel are covered by the same policy. Before the announcement, the decision was being made by individual commands.

As more service members serve openly in the Hampton Roads area I believe that it will do much to change minds and hearts among many local residents.  Yes, the Bible thumpers will have a cow as gays are more openly accepted in all walks of life, but hopefully their influence and numbers will dwindle.
Posted by Michael-in-Norfolk at Saturday, July 21, 2012