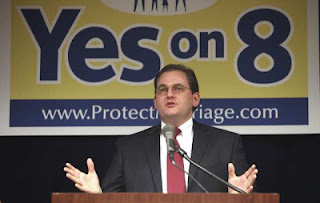 While the National Organization for Marriage never seems short of money - I suspect thanks to the Roman Catholic Church hierarchy and the Knights of Columbus - as the Supreme Court appeal of the 9th Circuit ruling striking down Proposition 8 nears oral arguments in March, Protect Marriage, the anti-gay organization which is defending Prop 8 since the State of California has refused to do so is now claiming that it is broke.   Given the Christofascist proclivity to lie incessantly, it is hard to know whether the whining is true or merely a form of scare tactics to drive Kool-Aid drinkers and anti-gay extremists to take out their checkbooks and stroke checks.  Reuters has coverage of Protect Marriage's purported financial straits.  Here are highlights:

ProtectMarriage.com, the advocacy group defending a California gay marriage ban now under review by the high court, showed a $2 million deficit in its legal fund at the end of 2011 - the third year in a row that expenses exceeded donations, federal tax records show.

The 2012 accounts are not yet available. ProtectMarriage.com says it has since covered the 2011 shortfall. However, it is still $700,000 short in fundraising for its Supreme Court costs, according to a ProtectMarriage.com attorney, Andrew Pugno. That message has gone out to donors, with some urgency, as the Supreme Court prepares to hear arguments in March in its first thorough review of same-sex marriage.

"Unless the pace of donations starts to pick up right away, we could soon be forced over a financial cliff," ProtectMarriage.com said in an email to donors earlier this month.

ProtectMarriage.com's lead outside counsel, Charles Cooper, has not stopped work on the Supreme Court case, although he declined to comment on financial arrangements with clients.

But gay marriage opponents' money problems go beyond legal fees for the landmark case: they were vastly outspent in four state ballot campaigns last fall, and lost all of those races.

The fund-raising fall-off is a result of donor fatigue, the dramatic rise in public support for gay marriage and the softening of some major gay marriage opponents, including the Mormon Church, people involved with the campaigns say. Both individuals and institutions opposed to gay marriage say many are fearful of being associated with the cause.

A group of corporations opposed to DOMA has formed the Business Coalition for DOMA Repeal, including Marriott International Inc, Aetna Inc, eBay Inc, and Thomson Reuters Corp, the corporate parent of Reuters News.

I for one hope the claims of financial straits are true.   And kudos to the corporations that have stepped up to help remove religious based bigotry from the nation's laws.