Why Are So Mant "Godly Christians" Such Horrible People? 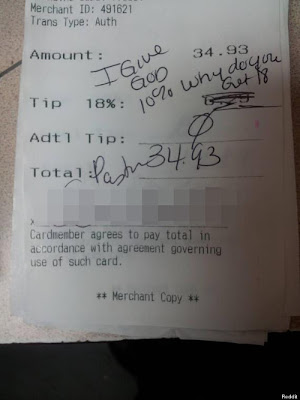 The late Mahatma Gandhi is purported to have said “I like your Christ, I do not like your Christians. Your Christians are so unlike your Christ.”  Sadly, no truer statement sums up the reality of  today's "godly Christian" crowd who make a huge public display of the supposed piety - think Tony Perkins, Maggie Gallagher, Benedict XVI, the list is endless - yet are best known for the hate and bigotry that marks them in a crowd.   Apparently, they've forgotten the directive found in Matthew 6:6"

And then there's their misery treatment of others.   A post on Crumbs from the Communion Table looks at the batshitery of a "godly Christian" pastor who stiffs a waiter while congratulating himself on his assumed godliness.  Having worked as a waiter years ago in my college days, I know first hand how badly wait staff gets screwed by large parties, so I identify with the aggrieved waiter.   Here are highlights:

The story: The pastor was part of a party of 20 who ate at this server’s restaurant. Like many American restaurants, this particular one has a policy of adding an automatic 18% tip for large parties. It’s something the computer does automatically, not something the server has any control over.

According to the server, the pastor and his party tried to get around the automatic 18% tip by asking for separate checks, even though the same man was paying for the whole table. The server says that everyone was happy with the service; they just didn’t like the idea of a compulsory tip.

The result? The pastor scribbled out the tip, leaving none at all, and adding the note, “I give God 10%. Why do you get 18?”

Oh, and just to drive the point home, he made sure to add the word “Pastor” above his signature at the bottom.

If you’ve read my book TORN, you know that I had similar experiences waiting tables:

“Sundays are the worst,” one of the servers explained to me. “That’s when the church crowd goes out to eat.”


“What’s wrong with the church crowd?” I asked.


“Oh, honey,” she said. “They’re usually the most demanding, and they’re always the worst tippers. I guarantee you, if you see your table praying before the meal, you can mentally subtract a third from your tip.”

I'm accused of being too hard on conservative Christians, but seriously, there are few groups of people who are more selfish and self-centered.  Gandhi got it right.   No one is a better advertisement for shunning Christianity today than the godly Christian crowd.