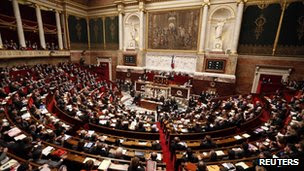 The Catholic Church leadership is facing yet another defeat in a country that was once a bastion of Catholicism.  Also suffering a defeat is NOM which had sought to bolster support for anti-gay forces in France.  Despite these efforts, the French National Assembly has just passed a key measure in the legislation under consideration that will bring full same sex marriage rights and gay adoption to France.  The vote is a triumph for modernity and the banishment of religion from the civil laws in secular nations.  One can only when the United States will reject Christofascism and join other advanced nations and adopted same sex marriage nationwide.  Here are highlights from BBC News:

Deputies voted 249-97 in favour of redefining marriage as being an agreement between two people - not just between a man and a woman.

President Francois Hollande's Socialists and their left-wing supporters backed it, opposed by many opposition UMP and centrist MPs.

The proposals have generated protests and counter-protests for months.  Opinion polls suggest that around 55-60% of French people support gay marriage, though only about 50% approve of gay adoption.

Correspondents say the ease with which the article passed suggests the bill as a whole will pass.
Debates are expected to go on for more than a week, as MPs discuss hundreds of amendments, most of them filed by the centre-right opposition.

On the way they are expected to approve the other key measure in the bill, which would allow gay couples to adopt children.

It is expected that the legislation will reach the statue books by the middle of the year, AFP reports.

In September last year, Cardinal Philippe Barbarin, the Roman Catholic archbishop of Lyon, argued that plans to redefine the concept of marriage would open the door to incest and polygamy.


Posted by Michael-in-Norfolk at Saturday, February 02, 2013