Gun Deaths - The Price of "Freedom"? 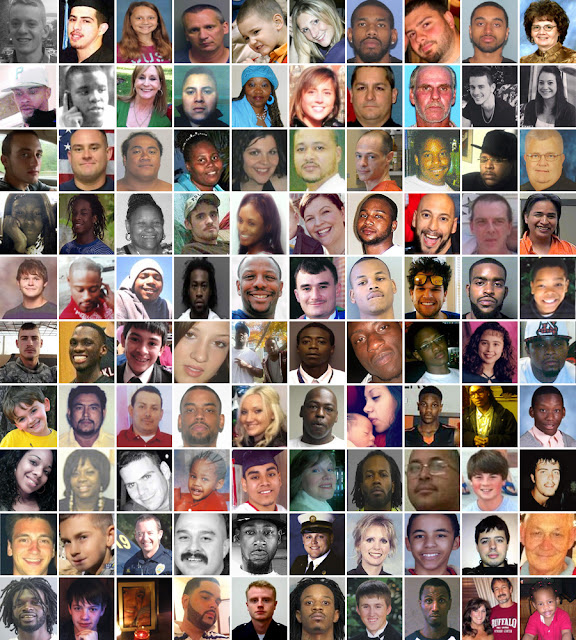 I am an unapologetic advocate for strict gun control laws.  Some of my Republican neighbors would hotly debate the issue, but the truth is that America has an insanely high number of gun deaths - there have been 1,280 since the Sandy Hook Elementary massacre in December according to Huffington Post and 1,475 according to Slate which included suicides and police shootings.  Some are suicides - gun availability increases suicide rates and successful completions - some are murders, others are accidental.  But the results are all the same.  Individuals needlessly dead thanks to 2nd Amendment fanatics and gun manufacturers.  The composite image of victims is via Huffington Post.  Here are a few article highlights:

It was Christmas night when Sincere Smith, 2, found his father’s loaded gun on the living room table of their Conway, S.C., mobile home. It took just a second for Smith’s tiny hands to find the trigger and pull. A single bullet ripped into his upper right chest and out his back.  .  .  .  .  Sincere died on an ambulance gurney as he was transferred to a second hospital in Charleston.

There were 29 other shooting deaths across the U.S. on Christmas. A soldier was shot and killed in his barracks in Alaska. A man was murdered in the parking lot of Eddie's Bar and Grill in Orrville, Ala. A 23-year-old was shot at a party in Phoenix. A Los Angeles County Sheriff's Department employee was killed in a drive-by.

A 20-year-old Louisville, Ky., man was shot and killed after walking his sister home. On Christmas Eve, he had posted an R.I.P. on his Facebook page for a friend and former classmate, who had been gunned down that day.

A 10-year-old in Memphis, Tenn., Alfreddie Gipson, was accidentally shot to death by gun purchased by an older brother, who had gotten the weapon after being bullied at school. Gipson was jumping on a bed when the gun slipped out of a mattress. It discharged when his 12-year-old brother tried to put it back, their mother said at a vigil.

There were at least 41 homicides or accidental gun deaths on New Year's Eve. On New Year's Day, at least 54 people died from bullet wounds.

Through Google and Nexis searches, The Huffington Post has tracked gun-related homicides and accidents throughout the U.S. since the schoolhouse massacre in Newtown, Conn., on the morning of Dec. 14. There were more than 100 such deaths the first week after the school shooting. In the first seven weeks after Newtown, there have been more than 1,280 gunshot homicides and accidental deaths. Slate has counted 1,475 fatal shooting incidents since Newtown, including suicides and police-involved shooting deaths, which The Huffington Post did not include in its tally.


When is the madness going to stop?