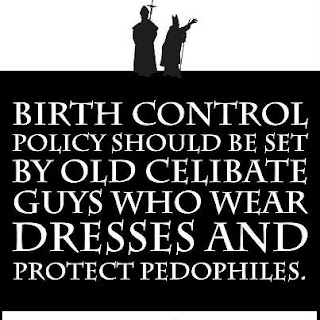 In a move that he hopes will placate the child rapist protectors in the Roman Catholic Church and  anti-women right wing religious denominations, Barack Obama and the Department of Health and Human Services have released new regulations that would allow Catholic institutions and similar religious controlled colleges and hospitals to avoid having to directly provide birth control coverage to female employees.  Candidly, I doubt it will make these religious extremists happy and predict that they will continue to fraudulently claim that the Obama administration is trampling on their "religious liberty."  It is they, not the Obama administration, that want to trample on religious liberty for all but themselves.  A piece in The Daily Beast looks at this new measure by Obama:

On Friday, the Obama administration put forth its proposed compromise for cleaning up the mandated birth control pile of poo it blundered into early last year.

Now, the administration is back with a tinker to its original compromise that holds considerable promise for placating (almost) everyone: in cases where religious employers object to birth control, the insurance companies that handle their health benefits will automatically arrange for separate, free, contraception-only policies, the costs of which will be offset by giving the insurers a break on the fees they are charged to participate in the insurance exchanges being set up under the ACA. (That is, of course, the boiled-down explanation of how it works. There is much fine-tuning yet to come.)


Women get access to birth control. Religious groups don’t have to pay for it, or even directly arrange for it. Insurers get a cost offset. Everybody wins! More or less.

That is not to suggest that everyone will be happy. (Are they ever?) And the 44 lawsuits already filed in protest of this particular mandate—then put on hold until the administration clarified its position—will likely start rolling again. Already, the conservative Susan B. Anthony List PAC is grousing about the White House’s assault on “religious and moral freedom.”

But this proposal makes clear that the White House learned its lesson and is trying to show respect for the concerns of religious conservatives. This, in turn, may help separate hard-core opponents of contraceptive coverage from those who simply disliked the my-way-or-the-highway bossiness of the administration’s original mandate. At the very least, the compromise will defang charges from ranters like Rush that Obama is some high-handed, amoral elitist determined to ram his views down the throats of decent God-fearing Americans. In this political climate, that may be the best the president can hope for.

I suspect that the author is right and Obama will simply never be able to please those who see women as evil temptresses and sluts (e.g., the Catholic hierarchy) or those who want to keep women barefoot, pregnant and preferably uneducated (e.g., the Southern Baptist Convention and evangelical Christian denominations).  A column in the Chicago Tribune last year summed up what's really going quite well:

[W]hat I don't understand is the bishops' obsession with sex. Yes, the Church is (wrongly) against contraception. But the Church is also against the death penalty. Why don't the bishops raise a stink about that? And the Church was opposed to the Iraq war. Why didn't they condemn George W. Bush for bombing a country that did not attack us first? Why do they only get their episcopal panties in a twist when it comes to sex?

No, this is not a case of President Obama trying to interfere with religious freedom. This is a case of Catholic bishops trying to force their narrow views about sex on everybody else.

Unless, of course, the sex is between priest and children and youths - then the good bishops have amnesia and are blind as to what is happening under their watch.  The hypocrisy is stunning.