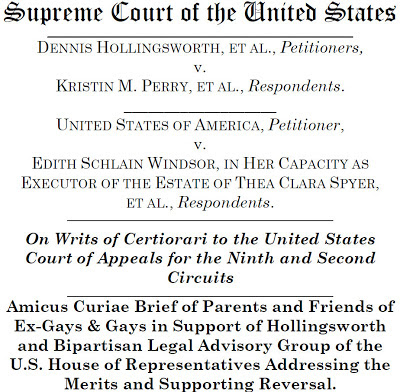 For those unfamiliar with Parents and Friends of Ex-Gays ("PFOX") it is an organization founded by and financially bankrolled by leading Christofacists organization - some of which are registered hate groups - that exists for the sole purpose of maintaining the myth that sexual orientation is a "choice" and something that can be "changed."  While PFOX constantly talks about the thousands and thousands of "ex-gays" that allegedly exist, the only ones that are ever visible are those on "ex-gay" ministry payrolls.  The DOMA and Proposition 8 cases before the U. S. Supreme Court have brought forth a veritable avalanche of amicus brief filings by every nut-bag Christofascist organization imaginable.  Thus, it is no surprise that PFOX has joined the list of religious extremists submitting delusional briefs in the cases.

As the American Bar Association copy of the PFOX's brief shows, PFOX seeks to deny equity for LGBT Americans.  A quick read of the brief shows it to be a regurgitation of the standard discredited "research" used by the Christofascists to avoid a finding that sexual orientation is immutable and that, therefore, any gay laws should be given strict scrutiny in terms of rationale and discriminatory impact.  If the law clerks at the U. S. Supreme Court are smart, the PFOX brief will be immediately "round filed."  Joe Jervis has an apt description of the PFOX batshitery:

Parents & Friends Of Ex-Gays (PFOX) have filed a Supreme Court brief against the overturn of DOMA. The group is headed by lifelong homosexual Greg Quinlan, who also chairs the anti-gay New Jersey Family Policy Council. In the brief PFOX cites the 2009 DC Superior Court ruling that "ex-gays" are to be afforded anti-protection discrimination as a distinct sexual orientation. The brief goes on to declare that nobody is born gay, that homosexuality is "chosen," and that all the members of PFOX can be found trolling the glory holes at dirty bookstores and truck stops with Eugene Delgaudio on any given night.*

PFOX goes on to cite NARTH, whose co-founder was busted for hiring lithe young Latino prostitutes, and JONAH, who is being sued for asking male clients to expose their genitals and grope themselves in order to "get in touch with their masculinity." Also cited is "ex-gay counselor" Richard Cohen, who asks clients to beat a pillow with a tennis racket while screaming, "Why, Mommy? Why did you make me gay?"