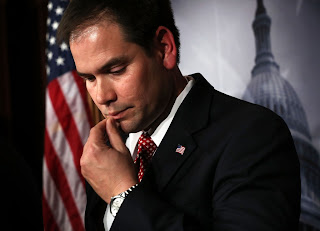 The Republican Party finds itself between a rock and a hard place on immigration reform.  On the one hand, if the GOP continues to its anti-immigrant agenda, it is slowly committing suicide and driving voters into the waiting arms of Democrats.  On the other hand, GOP candidates must face the white supremacist dominated base of the party to which the party has pandered for years now.  Doing nothing isn't really an option, but the blood bath that some candidates will face for supporting immigration reform will not be pretty.  The Kool-Aid drinkers will decry reform as amnesty and will be outraged that undocumented immigrants - who they clearly view as a less than human form of vermin (even as the members of the GOP base pat themselves of the back for being such godly Christians) - are to be given a path to citizenship rather than speedy deportation.  Several columns look at this political gamble.  First are highlights from the Washington Post:

[Marco] Rubio is widely seen as a 2016 Republican presidential candidate and touching immigration, which remains a, well, touchy subject among the GOP rank and file, brings real risk with it.

“This is going to be tough for Republicans and the recidivist elements in our party,” said GOP strategist Alex Castellanos, himself a Cuban-American.”It will all be fine until there is a GOP primary, say for president, and one candidate breaks out as the anti-immigration candidate and appeals to GOP fears and not hopes.”

In hopes of selling the idea to conservatives first, Rubio has been working the conservative pundit ranks on the issue for several weeks now, hoping to reverse George W. Bush’s inability to sell his own immigration reform proposal to the party’s talking heads.

When pressed by Hannity on the idea that the 11 million (or more) people would be able to qualify for citizenship under the bill, which is by far the most controversial part of the proposed legislation, Rubio responded: “We’re not trying to punish anybody here. It’s not about that we’re angry at immigrants. It’s about the fact that we don’t want this to ever happen again and we don’t want to be unfair to the people that have done it in the right way.”

But, all of that doesn’t mitigate the political risk for Rubio in getting so far forward on the issue. In a November Washington Post-ABC News poll, just more than one in three (37 percent) of self-identified Republicans supported a “path to citizenship” for those in the country illegally as compared to 71 percent of Democrats and 59 percent of Independents who favored some sort of path.

“If Rubio helps lead us into sanity on the issue it would be great for him and very good for the GOP,” said Ed Rogers, a Republican lobbyist and longtime operative. “We need a savior on immigration.”


The other part of the equation, of course, is that if several million new citizens come out of the proposed reforms, these voters are not likely going to run to the arms of the GOP which continues to push draconian policies that are disproportionately adverse to the working classes.  A New York Times column looks at this reality:

By definition, creating a path to citizenship turns illegal aliens into potential voters, and any serious analysis of Hispanic opinion tells you that those new voters’ interests and beliefs will tend to align with the Democratic Party. No, not necessarily forever, but across the next few decades of American politics there is simply no plausible case that gratitude to Marco Rubio and Jeff Flake will convert a liberal-leaning voting bloc into a true swing constituency, let alone a Republican-tilting demographic. Which makes it very, very easy to imagine a future where immigration reform helps Republicans win a slightly higher percentage of the Hispanic vote, but costs them many more votes in absolute terms by accelerating the ongoing demographic shifts in the electorate. (And that’s without getting into the incentives that such a deal would create for future migration, or its disillusioning impact on the working class white voters the G.O.P. still can’t win without …)

Presumably these costs would be reduced if the reform’s path to citizenship were long and arduous enough, with more waiting and more hurdles than a straightforward amnesty. But then the immediate political benefits to Republicans become much more uncertain as well, since they would still be playing the “bad cop” role in a policy debate that would no doubt extend for many years after the initial bill were passed. (The ads write themselves: “Republican candidate X says that he supports immigration reform, but he’s voted again and again to keep hardworking immigrants in legal limbo, deny their children benefits, etc. …”)

The GOP has put itself on the rope on which it now twists.  As with its cynical embrace of the Christofascists and Tea Party saboteurs with a view to short term gain, no thought to the long term negative effects of making the GOP the party of racists and white supremacists seems to never have been calculated.  The GOP deserves to reap what it has sown by becoming the party of greed, bigotry, religious extremism and racism.