Why the GOP War on Democracy Must be Stopped 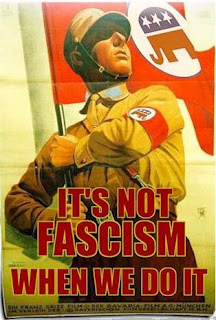 This blog has looked at the Republican effort to subvert the Electoral College in several posts, but  many readers still underestimate the danger this effort poses.  If successful, thanks to previously gerrymandered districts, majority rule would simply no longer matter.  A future president could win the White House even though his/her opponent won millions of more votes.  Democracy in effect would be dead in America.  What makes the situation even more frightening is that the party pushing for this disingenuously crafted de facto revolution is the party of racism, greed, religious extremism and open bigotry against millions of Americans.  It is the most serious threat to democracy as I have known it in my lifetime.  America now has wealthy disparities worthy of a banana republic of old.  If the GOP succeeds our system of government will also reflect the rigged elections of the former banana republics.  One can only hope that American wake up to the threat and begin their assault on the GOP immediately, beginning in states like Virginia which have elections this year.  The bastards MUST be voted out of office.  They are literally a threat to democracy.  A piece in Daily Kos quantifies the threat we are now facing.  Here are highlights:

Republicans can't win national elections anymore, having lost the popular vote in five of the last six, and with demographics shifts moving solidly against them, rather than try to better represent the will of the American electorate, they're instead going to try to break the system so that the will of the American electorate no longer matters. And it would be perfectly legal, because we choose our presidents through the Electoral College, and there are very few rules about how the electors are allocated. Make no mistake: This is a war on the very concept of democracy and republic. This is a war on the very nature of our system of governance. If it succeeds, it will tear this country apart.

Last week, while much of the country was focused on President Obama's second inauguration, or was distracted by a three-day weekend, a quiet coup by Virginia state Senate Republicans disappeared a Democratic state Senate seat. Virginia's upper house is evenly split, but with Sen. Henry L. Marsh III in Washington for the presidential inauguration, the Republicans used his absence and a party line vote to approve a new redistricting plan that eliminates a Democratic Senate seat, thus giving themselves a likely more permanent majority, beginning in 2015. But that was only the beginning of what they want to do. Virginia's Republicans have an even more cynical plan for 2016:


A Republican-backed bill that would end Virginia's winner-takes-all method of apportioning its 13 electoral votes in presidential elections cleared its first legislative hurdle Wednesday.

How would the new system work?

And what would it have meant, last November?

President Obama won Virginia by 149,298 votes, or 3.88 percent, yet under this new Republican plan he would have won less than half of Virginia's electoral votes. Whatever you want to call it, that is not democracy, it is not the will of the people, and it is antithetical to every precept by which representative government is supposed to work.
Think about what it would do to this country, and what it would tell the rest of the world. President Obama won the national popular vote by close to 5 million votes, but if the Republican plan had been in effect Mitt Romney might now be president. No matter your political allegiance, if you believe in such basic concepts as democracy and representative government and will of the people and fair elections, such a plan should leave you not just angry but infuriated and aghast. Unless this effort is buried, it should be the issue and the the story, because nothing even approaches it in importance. Every political issue is by it trumped, because it would trump every issue, and in countless cases countermand what the people of this nation want done on the issues.

Unless this effort is buried, all elected Democrats must understand and act on the reality that Republicans with this effort are proving they are neither responsible nor responsive, and that their every pretense of patriotism and honor is nothing but a lie. The danger of this effort cannot be overstated. And if it is allowed to happen, it is a certainty that if on election night 2016 a Republican has by these rigged rules stolen the presidency despite losing the popular vote by millions, the traditional media will shrug it off, just as they shrugged off the later proved stolen election of 2000. But this would be so blatant that even the traditional media's best efforts wouldn't be able to obfuscate it. It would tear the country apart, as every person of principle and conscience awakened to the reality that the dreams and ideals of democracy and republic were dead. But it would be too late. It would be legal, even though the rule of law itself no longer would have any basis in popular consensus.

The time to speak out is now. This can only succeed if done quietly, in the shadows. Already, Florida Republican leaders are backing away from the idea, and the more Americans hear about it, the more they will be outraged by it. Regardless of partisan affiliations, you can be sure that the vast majority of Americans still has a basic sense of fairness, and a respect for the ideals by which this country is supposed to work. The time for Democratic leaders to speak out is now. The time for Republican leaders to be forced to take public stands for or against representative government is now. All Americans of conscience and integrity must stand up and be heard, or anything good and just about the American system of government will fall and be silenced.