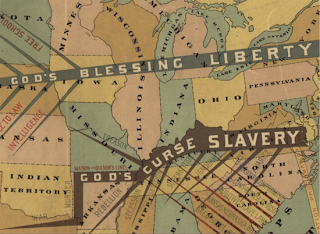 At this point in my life, I have lived far longer in the South than any where else, including in Alabama, Texas and Virginia.  One phenomenon that continually strikes me is that more often than not, southern states more often than not take actions and support positions that are against there own best interest when viewed by any objective rational basis.  Motivating these counter productive actions and policies is typically a slavish deference to ignorance embracing religion and all to frequently racism.  While most southern white Republicans won't verbalize the true motivation for their hatred of Barack Obama, in truth they cannot tolerate a black man in the White House.  It reminds them all too well of their declining power and privilege. One certainly sees the symptoms of this sickness in the Virginia GOP and its ignorance and bigotry embracing masters at The Family Foundation.  A piece in the New York Review of Books looks at the South's self-defeating behavior.  Here are highlights:

[T]he current South is willing to cut off its own nose to show contempt for the government. Governor Rick Scott of Florida turned down more than $2 billion in federal funds for a high-speed rail system in Florida that would have created jobs and millions of dollars in revenues, just to show he was independent of the hated federal government. In this mood, his forebears would have turned down TVA. People across the South are going even farther than Scott, begging to secede again from the Union. Packer notes that the tea is cooling in parties across the rest of the nation, but seems to be fermenting to a more toxic brew in the South. No one needs better health care more than the South, but it fights it off so long as Obama is offering it, its governors turning down funds for Medicaid. This is a region that rejects sex education, though its rate of teenage pregnancies is double and in places triple that of New England. It fights federal help with education, preferring to inoculate its children against science by denying evolution.

No part of the country will suffer the effects of global warming earlier or with more devastation than the South, yet its politicians resist measures to curb carbon emissions and deny the very existence of climate change—sending it to the dungeon with evolution and biblical errancy. One doesn’t need much imagination to see the South with lowered or swollen waters in its rivers and ports, raging kudzu, swarming mosquitos, and record-breaking high temperatures, still telling itself that global-warming talk is just a liberal conspiracy. But it just digs deeper in denial. The South has decided to be defeated and dumb.

Humans should always cling to what is good about their heritage, but that depends on being able to separate what is good from what is bad. It is noble to oppose mindless change, so long as that does not commit you to rejecting change itself. The South defeats its own cause when it cannot discriminate between the good and the evil in its past, or pretends that the latter does not linger on into the present .  .  .

Tradition dies hard, hardest among those who cannot admit to the toll it has taken on them. That is why the worst aspects of the South are resurfacing under Obama’s presidency. It is the dignity. That a black should have not merely rights but prominence, authority, and even awe—that is what many Southerners cannot stomach. They would let him ride on the bus, or get into Ivy League schools. But he must be kept from the altar; he cannot perform the secular equivalent of taking the Lord in his hands. It is the dignity.

This is the thing that makes the South the distillation point for all the fugitive extremisms of our time, the heart of Say-No Republicanism, the home of lost causes and nostalgic lunacy. It is as if the whole continent were tipped upward, so that the scattered crazinesses might slide down to the bottom. The South has often been defeated. Now it is defeating itself.