More Blood on the Hands of the Christianists 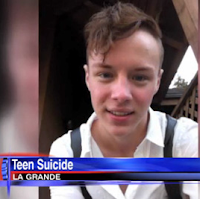 I hate having to post stories like this one.  They make me feel literally physically sick.  The thoughts of the wasted life and lost potential to society are chilling.  And so is the hate marketed as the Christian message that is the driving force behind the anti-gay bullying that leads to these gay teen suicides.  But the stories of the damage done by the Christofacists and their sycophants in the Republican Party need to be disseminated to force straight allies and others to realize that every time they stand by silently or donate a dollar to an anti-gay church they ARE PART OF THE CAUSE of these needless death.   While Maggie Gallagher, Bryan Fischer, Brian Browen, Victoria Cobb, Tony Perkins, Pope Benedict XVI and their allies may secretly revel in these deaths, decent moral people should be repulsed and scream out "No more!"  And they need to take action by ending their support of anti-gay politicians, hate groups like NOM and FRC and TFF, and yes, anti-gay churches like the Roman Catholic Church and Southern Baptist Church among others.  Towleroad looks at the tragic suicide death of Jadin Bell:

A tragic story out of La Grande, Oregon, where 15-year-old Jadin Bell has been taken off of life support after hanging himself in a schoolyard last week, KOMO News reports:

Dozens of people came together last week in La Grande in a vigil for Jadin, trying to understand what drove him to despair nine days ago. He came to the playground of Central Elementary School in La Grande. He climbed on a play structure and hanged himself. Someone passing by tried to rescue him. He was brought to Portland and Doernbecher Children's Hospital where he was put on life support.

Hill says Jadin was pushed to suicide after being bullied in person and on the Internet for being gay.

"He was different, and they tend to pick on the different ones," Hill said.

Hill says Jadin asked his parents to home school him. He feared turning in the bullies would make things worse.


Sadly, Jadin was the second teen in La Grange in the last four months to end their own life due to bullying.  A 16-year-old girl killed herself in October.  As this blog has reported numerous times, the principal opponents of strict anti-bullying policies are the Christofascists who want a free license to make the lives of LGBT youth a living hell.   If there is a Hell, is believe that Maggie Gallagher, Bryan Fischer, Brian Browen, Victoria Cobb, Tony Perkins, Pope Benedict XVI and their anti-gay  allies have special reserved seats.

I've been in Jadin's shoes - twice.  I simply wasn't successful in my attempts.  Perhaps that is also what sends shivers through me.