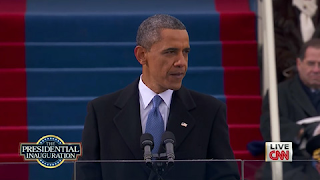 This blog has been critical of Barack Obama's less than 24 hour later walk back from his gay inclusive inaugural address.  For those who have already forgotten, Obama stated on January 22nd through his press secretary that marriage is an issue to be left to the states.  Never mind that the Supreme Court slammed Virginia and struck down its laws banning interracial marriage back in the late 1960's.  Discrimination is either discrimination that violates the Equal Protection Clause of the United States Constitution or it is not.  If it is, then the matter is not an issue to be left to the states.  The New York Times has called out Obama for his attempt to have his cake and eat it too and makes the case that Obama and the Justice Department must do more than simply refuse to defend DOMA.  They need to file a formal brief explaining why DOMA is unconstitutional and needs to be struck down.  Here are excerpts from the editorial:

By including gay rights in the arc of the struggle for civil rights — the road “through Seneca Falls and Selma and Stonewall” — President Obama linked his presidency to ending antigay discrimination and underscored the legal wrong of denying gay people the freedom to marry.


Now that Mr. Obama has declared that he believes denying gay people the right to wed is not only unfair and morally wrong but also legally unsupportable, the urgent question is how he will translate his words into action. To start, he should have his solicitor general file a brief in the Proposition 8 case being argued before the Supreme Court in March, saying that California’s voter-approved ban on same-sex marriage is unconstitutional.

Just a day after the inauguration, Mr. Obama’s spokesman, Jay Carney, said that while Mr. Obama supports same-sex marriage as a policy matter, the president still believes it is an issue for individual states to decide. That was Mr. Obama’s formulation when he first announced his support for same-sex marriage in May, and even then it made no sense, except perhaps as political cover approaching the general election campaign.

Marriage is traditionally regulated by the states, but there are constitutional limits on what states may do. The Supreme Court’s 1967 ruling in Loving v. Virginia prevented states from forbidding marriages between interracial couples like Mr. Obama’s own parents.

Furthermore, the day after the Proposition 8 case is argued, the Justice Department will be asking the Supreme Court to invalidate the Defense of Marriage Act, the atrocious 1996 statute that denies federal benefits to lawfully married same-sex couples. .  .  .  .  It is hard to see how the marriage act’s discrimination is presumptively invalid but not California’s wiping out of existing marriage rights for gay people that were mandated by the state’s top court.

For the administration to be missing in action in this showdown risks conveying a message to the justices that it lacks confidence in the constitutional claims for ending gay people’s exclusion from marriage or that it believes Americans are not ready for a high court ruling making marriage equality the law of the land — impressions strikingly contradicted by legal precedent, the lessons of history and by the president’s own very powerful words.

Mr. Obama’s Inaugural Address appeared to reflect a deepened understanding that the right to marry the person of one’s choice is a fundamental right “under the law.” He needs to make sure his solicitor general conveys that sound legal view loud and clear in the Proposition 8 case.

Kudos for the Times.  The only other thing it could have zeroed in on is the reality that religious based discrimination alone is the sole motivation behind both Proposition 8 and DOMA.   Obama needs to grow the balls to call religious based discrimination - something contrary to the Constitution's promise of religious freedom - out for what it is.  If the Christofascists don't like the tuth, so what.  They don't vote Democrat anyways.  Religious based bigotry needs to become just as socially unacceptable as open racism has become - or at least has become outside of today's GOP.