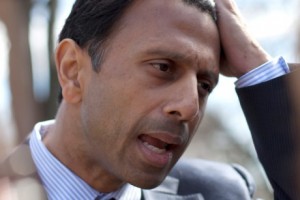 There has been media buzz about Louisiana Governor Bobby Jindall chiding Republicans that the GOP needs to stop being "the stupid party" at the Republican National Committee gathering last week.  What the media wonks fail to focus on is that Jindal has been leading the charge on policies that a majority of Americans don't want.  He is in fact, a major player in making the GOP the stupid party.  The fact that Jindal is seen by some as a possible presidential candidate in 2016 demonstrates that those within the GOP continue to drink far too much of the Christofascist/Tea Party Kool-Aid.  A piece in Think Progress looks at 5 policies championed by Jindal that seek to move the nation backwards, not forward.  Here are excerpts:

Days after Mitt Romney lost his bid for the presidency, Louisiana Governor Bobby Jindal (R) kicked off a publicity campaign for his 2016 run, casting himself as a different kind of Republican. In a series of interviews, statements and op-eds, Jindal called for reform within the GOP, embracing a more moderate message that could appeal to middle class voters.

In a Thursday night speech to the Republican National Committee, the Louisiana governor urged his party to .  .  .  . stop being the stupid party”:


We must stop being the stupid party. It’s time for a new Republican party that talks like adults. It’s time for us to articulate our plans and visions for America in real terms. We had a number of Republicans damage the brand this year with offensive and bizarre comments. We’ve had enough of that.

But before Jindal begins giving advice to members of his own party, he might consider how his own record is alienating mainstream voters:


1. He permits Louisiana schools to teach creationism. Thanks to Jindal’s educational voucher system in Louisiana, students will be attending private or parochial schools on the taxpayer’s dime. But those schools don’t necessarily meet the standards of the state’s public schools, and may teach students creationism instead of standard science curricula.


2. He allows state employees to be fired for being gay. During his first few months as governor, Jindal decided not to renew an anti-discrimination executive order protecting LGBT employees who work for the state. Jindal has also said that same sex marriage opens up a path for courts to overturn the Second Amendment.


3. He has signed bills to intimidate women seeking abortions. Jindal compared women who have gotten abortions to criminals. But that unpalatable sentiment also came with a policy change — he signed a bill that requires all abortion clinics to post intimidating messages in their waiting rooms, and establishes a website that points women to crisis pregnancy centers instead of abortion-providing facilities. Jindal also signed a measure creating a 24-hour waiting period between a woman’s mandatory ultrasound and the date of her abortion.


4. He seeks to dramatically cut taxes for the wealthy, increase taxes for everyone else. Jindal’s latest tax proposal would raise taxes for 80 percent of Louisianians. The poorest 20 percent — with an average income of $12,000 — would face substantial tax increases, while those in the top one percent would on average get a tax cut of $25,423.


5. He refuses to provide health care for Louisiana’s poorest. Louisiana has the third highest uninsured rate in the country. Twenty percent of residents lack insurance of any kind. But as one of the governors vehemently opposed to Obamacare, Jindal turned down the Medicaid expansion offered under the law, ignoring the fact that it would drastically lower the numbers of uninsured and ultimately save the state money on emergency care.

Jindal is part of the GOP's problem, not a Moses like leader who will bring the party back from the delusional fringe.  Every one of the actions listed above is the opposite of what a majority of Americans support.  Jindal may appeal to the Tea Party and Christofascists, but he is far outside of the main steam.