Obama's Agenda Is Not Liberal 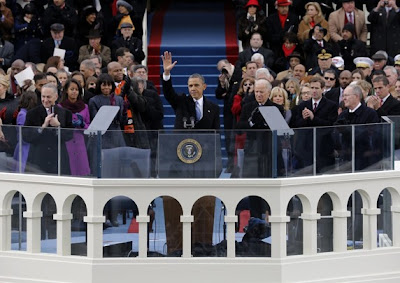 In the wake of Barack Obama's second inaugural address, the far right noise machine has been in overdrive depicting his announced policy positions and agenda items as "liberal," "far left" and every other negative term they can think of to whip the knuckle dragging Neanderthals and religious extremists in the GOP base into a spittle flecked frenzy.   Truth be told, Obama's agenda isn't overtly liberal - it only seems that way when compared to the GOP agenda which has drifted into far right lunacy.  Numerous polls show that a majority of Americans - in some instances a significant majority - support Obama's announced positions.  It is the GOP which has become the fringe political party that is increasingly out of step with the country.  Hence the GOP efforts to gerrymander districts and subvert the Electoral College in the face of the reality that a majority of Americans reject the GOP agenda.  A column in the Washington Post underscores the reality that Obama's agenda is not liberal.  Here are highlights:

If there was one word that was used most often to describe President Obama’s second inaugural address Monday, it was “liberal.”  .  .  . the next day, the White House expressed surprise at the notion that the president’s speech amounted to an affirmation of liberalism. Press secretary Jay Carney told reporters that he rejected “the idea that this was an ‘ism’ speech.” He added, “It’s on behalf of ideas that represent who we are as Americans.”

Opinion polls show that on almost all of the major positions Obama espoused in his speech — entitlements, immigration, climate change and same-sex marriage — a majority of Americans agree with him.

By that measure, Obama did not advance a liberal agenda. A consequential one, certainly, but one that reflects centrist views or center-left ones at most. The agenda seems liberal only when judged against the liberal-conservative divide we’re used to in Washington.

According to one poll, 74 percent of Americans support regulating greenhouse gas emissions to combat climate change. According to another, 68 percent oppose cutting spending on Medicaid, the public health insurance program for the poor. And other polls show that more than half of Americans favor a path to citizenship for illegal immigrants, a vast majority oppose cuts in education or transportation funding, and a slim majority support same-sex marriage.

The president’s embrace of same-sex marriage in his inaugural address illustrates how he emulates public views, even as he uses terms that sound bold and progressive. He said on a questionnaire in 1996 that he supported gay marriage, but he later said he backed only civil unions. His announcement of his support for same-sex marriage last year — which he carefully said was an expression of his personal view — tracked closely with public opinion as a majority of Americans came to share the same view.

Obama’s call to battle climate change in his second term underscores a similar phenomenon. His position sounds liberal because it appeases the environmental base of the Democratic Party and because Republicans have increasingly opposed efforts to stem global warming. But there wasn’t always such an ideological gap between the parties. In the 2008 presidential race, Obama and his opponent, Sen. John McCain (R-Ariz.), had almost exactly the same plan to help solve the problem of a warming planet.

Looking at this history and today’s opinion polls, it would seem pretty easy to find consensus in America on a lot of big issues — not just “liberal” or “conservative” solutions.

Again, it is the Republicans who are out of step with a majority of Americans.  Yet rather than moving towards the center, the party seems determined to move further towards the lunatic far right.